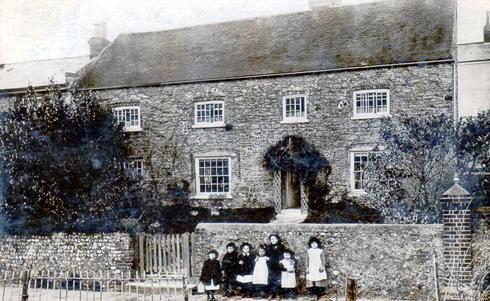 The Old Farmhouse, Fulking, in the 1900s
The Old Farmhouse is the only stone-faced building in Fulking and is believed to have been the original manor house. This property and Septima Cottages are probably the oldest buildings in the village. It is thought that the original building dates back to the 12th century and the mullioned windows and the east wall are 16th century. At one time a great hall extended north at the back of the house and a portion of the wall of this room remains part of the rear garden wall. The building has massive oak beams and one of the bedrooms has a floor of adzed oak planks, polished to a beautiful patina by many years of use. Up to 1930 the roof was finished with Horsham stone and until 1939 it had three staircases, but now has just two.

In the 1980s an elderly lady and broadcaster of Sussex history came to Fulking and gave a talk describing how she used to come to the village via the Dyke Railway just before war was declared in 1939. She lived with her aunt in The Old Farmhouse at one time and was able to show the present owner of the property where the third staircase had been located.

Stories associated with The Old Farmhouse abound. Smugglers are said to have used a hatch in the roof to pass kegs of brandy through to the shop next door. There is also supposed to be one, or possibly more, secret passages within the building. It has been suggested that one of these led to St Andrew’s Church in Edburton, but given the distance involved, this seems unlikely. Another theory is that the house was connected to the Shepherd and Dog for smuggling purposes, but so far, no evidence of the existence of either of these secret passages has been discovered. 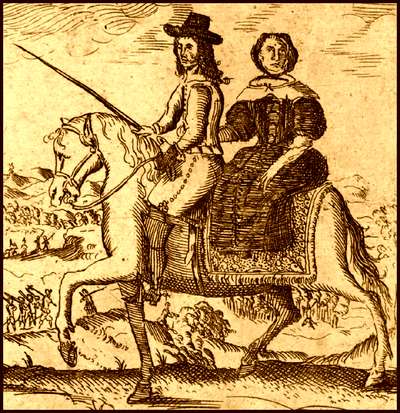 There is a small room where, in 1651, King Charles II is said to have hidden, before escaping over the Downs, via the bostal, to Shoreham harbour, from where he left for exile in France and it is thought that the house was also used as a refuge by folk able to leave London during the Great Plague in 1665, which also occurred during the reign of Charles II.

Yet another tale describes how, in 1940, a very attractive young lady and equally attractive young man stayed at the house. They were a very quiet couple who kept themselves to themselves and never socialised or talked to any of the villagers. It seems that subsequently they just disappeared and were never seen again. It was only much later that it was discovered that they had been arrested as spies.

Of course, the house is reputed to have a ghost. It seems that she takes the form of a charming, little, old lady, dressed in white who carries a bible. Apparently, she makes herself known mainly to children, but during WWII she was seen by seventeen Canadian soldiers who were billeted there in late 1943. These men went on to serve in the Italian campaign and during that time they wrote to friends in Fulking, telling how the old lady was always with them when ever they went into action and not one of them was wounded. 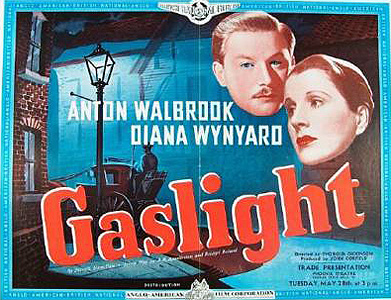 Poster for the 1940 film Gaslight

From the 1920s to the 1950s the house was used as a tearoom and a large white teapot was painted on the roof to attract customers, particularly walkers, who could see it quite clearly from the Downs. Between 1920 and 1939 this was run by Miss Dolly Coles and during this time her customers included the writers H.V. Morton, Ernest Raymond and Jeffrey Farnol. It was reputedly in these tearooms that a conversation on the merits of oil lamps versus electric lights took place (possibly around 1935 when electricity first came to Fulking), giving Patrick Hamilton the idea for his 1938 play Gas Light which was later made into two films (British 1940, American 1944). The tearooms reopened after the war and eventually closed in the 1950s.