Frederic Festus Kelly was a senior Post Office official who purchased the rights to a London trade directory in 1835 and went on to become the most important 19th century publisher of commercial directories. A University of Leicester digital library project devoted to such directories observes that “Kelly’s success was based on the innovative content and formats of his publications. He championed the production of county and provincial directories covering all settlements in a given area. These provided a wealth of information about each place, often including a commercial, street and classified trades section. He also retained the title of Post Office Directory for some time, giving his publications an aura of officialdom.” There is an informative 1893 interview, “The Baedeker of Babylon” [PDF], with Kelly’s grandson about how the directories were compiled.

EDBURTON (anciently Eadburga’s Town) is a parish 4 miles east from Bramber Station on the Horsham and Shoreham section of the London, Brighton and South Coast railway, 10 north-west from Brighton and 53 from London, in the Horsham and Worthing division of the county, hundred of Atherington and Poynings, rape of Bramber, union and petty sessional division of Steyning, county court district of Brighton, and in the rural deanery of Hurst, archdeaconry of Lewes and diocese of Chichester.

The church of St. Andrew is of flint and stone, in the Early English style, and has a tower containing 3 bells: nine of the windows are stained: the font is of lead, and dates from 1180: the church was restored in 1878, at a cost of £1,573, and has 225 sittings. The register dates from the year 1559. The living is a rectory, net yearly value £320, with residence, in the gift of the Archbishop of Canterbury, and held since 1913 by the Rev. Edward Griffith Evans M.A. of Clare College, Cambridge, hon. O.F.

Lord Leconfield, who is lord of the manor, and the Crown are the principal landowners. The soil is green sand, clay and part gravel; subsoil, chalk and clay. The chief crops are wheat, barley, oats and potatoes. The area is 1,094 acres; rateable value, £735; population in 1911 was 114 in the civil and 302 in the ecclesiastical parish. 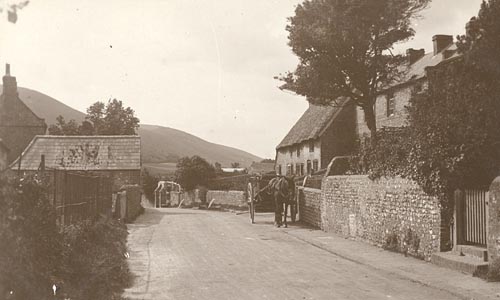 FULKING, Folking or Faulking (in Domesday Fochinges), in the ecclesiastical parish of Edburton, was constituted a separate civil parish under the “Local Government Act of 1894.” It is about 4 miles east from Bramber station on the Horsham and Shoreham section of the London, Brighton and South Coast railway and 8 north-west from Brighton, in the Lewes division of the county, Steyning union and petty sessional division and Brighton county court district. The Crown is lord of the manor. The soil is green sand, clay and part gravel; subsoil, chalk and clay. The chief crops are wheat, barley, oats and potatoes. The area is 1,552 acres; rateable value, £1,546; the population in 1911 was 188.

[All material transcribed, with minor formatting and punctuation changes, from pages 359, 360 and 373 of the 1922 edition of Kelly’s Directory for Sussex, published by Kelly’s Directories Ltd., London.]