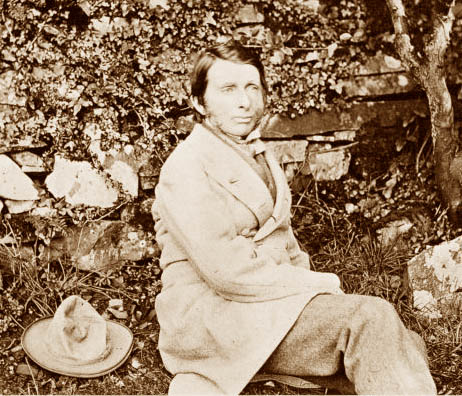 Artist, botanist, geologist, poet, polymath, proto-socialist, writer (39 volumes), and much else besides, John Ruskin (1819-1900) was a cultural colossus of Victorian England. He gave his first sermon when he was five years old and published his first journal article when he was fifteen. Today he is primarily remembered as the greatest art historian of his era. Residents of Fulking, however, have another reason to remember him — as a civil engineer: “He smiled a little at himself in later years when .. he said that civil engineering was his true bent and that his devotion to literature and art had all been a mistake, and that England had lost in him a second Telford.” [E.T. Cook (1912) The Life of John Ruskin, London: George Allen, Volume II, pages 163-164]

“The inhabitants of Fulking .. had for a long time a great difficulty in obtaining an adequate supply of drinking water. A hilly gathering ground was near, but nature seemed to have intended the water for other localities. All sorts of expedients were adopted, but all proved a failure. It happened that Ruskin occasionally visited the district, and the idea occurred to somebody that he might be able to help. The request was a strange one, but Ruskin began to think what could be done and, in the end, devised a scheme which has given Fulking as much water as it can ever hope to consume. Works have of course been required, but they did not cost very much, and they certainly do not disfigure the locality. The people have not been slow to show their gratitude for the boon thus conferred, and near the well which gives the inhabitants a constant service they have erected a beautiful marble memorial.” [Pall Mall Gazette, August 26, 1891, from the Manchester Examiner, reproduced in The Works of John Ruskin, London: George Allen, Volume 34, page 719. PDF] 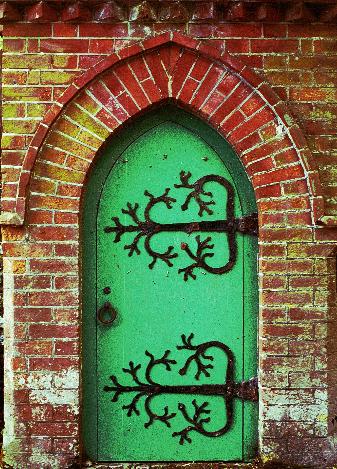 “John Ruskin .. had the idea of harnessing the waters of the Fulking stream to power an hydraulic ram which would pump the supply around the parish. The little Gothic pump house is still there and on it is a plaque bearing an inscription from Psalms 104, 10 and 107, 8.” [Brigid Chapman (1988) West Sussex Inns, Newbury: Countryside Books.]: 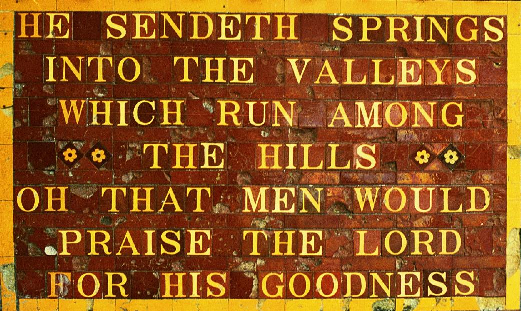 “The various structures associated with the village’s ingenious nineteenth century water supply are a unique feature of Fulking. Around 1886, water from the spring (located close to the Shepherd and Dog Public House) was harnessed to provide the village with its own piped water supply. Two men are credited with devising and instigating this scheme. One was John Ruskin .. and the other was Henry Willett from Brighton. The system supplied the village with piped water until mains water eventually arrived in 1951. The arrangement consisted of an hydraulic ram driven by water from a brick lined reservoir/balancing tank (located in the garden of the Shepherd and Dog) pumping water up to a reservoir close to Old Thatch on the north side of The Street. Although no longer working, the system remains largely intact today.” [Ed Lancaster (2008) Fulking Conservation Area, Haywards Heath: MSDC, page 9. PDF]

Tony Brooks reports that Ruskin used to stay at The Old Bakehouse (next door to the Shepherd and Dog) and that the new water supply involved “four reservoirs: one under each of the hand pumps in The Street, one for the drinking fountain by the entrance to the North Town Field and one at Perching Manor. The villagers maintained the system and the last person known to have been in charge of it was the local builder, Charlie Franks, who lived in Fulking all his life”. [Anthony R. Brooks (2008) The Changing Times of Fulking and Edburton 1900 to 2007, Chichester: RPM, page 29.]

The key component of the Ruskin/Willett scheme was the hydraulic ram pump. It was invented by Joseph Michel Montgolfier in 1796 and modern versions are still in use today. Its key advantage is that it requires no external source of energy beyond that supplied by an existing water flow. 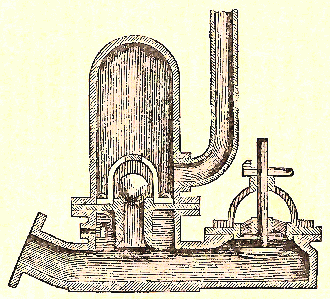 “The pumphouse by the roadside was part of the supply arrangements which continued until a new supply was provided in 1953. There is a small fountain in the village which [bears] the following inscription: ‘To the glory of God and in honour of John Ruskin Psalm LXXVIII that they might set their hope in God and not forget but keep his commandments who brought streams also out of the rock’.” [“A Ram Pump at Fulking”,Sussex Industrial Archaeology Society Newsletter 5, January 1975]. 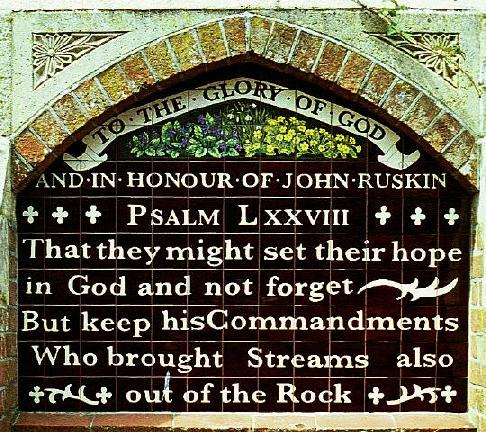 The inscription on the Fulking water fountain

Ruskin’s water supply collaborator, Henry Willett, a wealthy local brewer, was responsible for erecting the fountain with its inscription. Ruskin, however, was less than enthusiastic, writing to Willett in June 1887, with “sincere thanks for your kind note .., but I am too sad and weary just now to see anything; and I was grieved by your inscription on the fountain, for it made my name far too conspicuous, nor did I feel that the slightest honour was owing to me in the matter” [The Works of John Ruskin, London: George Allen, Volume 37, page 591.].