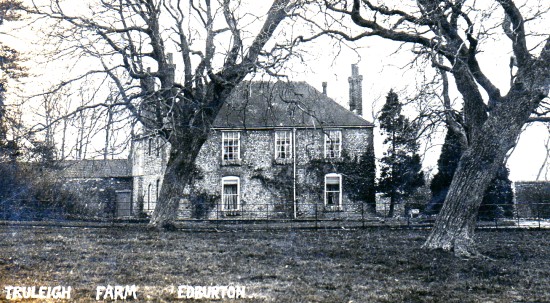 A postcard showing the farmhouse as it was in the early 1900s
Truleigh Manor Farm is adjacent to Edburton Road near the western edge of the historic parish. The Grade II listed farmhouse can be best seen from the lay-by on the road to the east of the house. There is a distinctive wooden dovecot in the middle of the adjacent field. Howe describes the house as “eighteenth century with an older undated north wing”.

The listing details read as follows:

The reference to the “castellated additions with pointed windows” is incorrectly dated. The photo shown above is a postcard, almost certainly produced in the early twentieth century, and it shows the house before the changes were made.

The house is believed to incorporate flint and rubble salvaged from the original manor. In the early 1800s the interior was refurbished. In the 1920s, extensions were added on the east and north sides and finished with a crenellated roof detail. The “castellated additions with pointed windows” thus date from this 1920s renovation. A large flint-faced dovecote was also built at this time.

The crenellated dovecot
George Wyndham, the Earl of Egremont, purchased the freehold of Truleigh Manor Farm in 1814. The farmer was John Horwood in 1841 although his name does not appear in the Edburton census returns of that year. It is not clear from that census who, if anyone, was then living in the farmhouse. Two families headed by agricultural labourers are listed in ‘Truleigh’ but they were probably living in the farm cottages rather than the farmhouse itself. By 1851 the resident farmer was John Tribe living with his wife, mother-in-law, two infant children, a groom, two female servants, and two young agricultural labourers. Melville’s Directory shows that John Tribe remained at Truleigh until 1858.

The Kelly’s Directories for the period 1859-1887, and the next three censuses, 1861, 1871 and 1881, show Charles Hill, a farmer originally from Dorset, and his wife Frances, from Ashurst, in residence. In 1861 they are aged 26 and 20, respectively, and living with their infant son, his Scottish nanny, and two female servants. By 1871 there are five children, a nanny, a house maid, and a couple from Norfolk working as groom and cook. In 1881 the household includes seven children and a single female servant.

The 1891 Kelly’s Directory shows that Charles Robinson had taken over the farm but the 1891 census return is mysterious. Just three residents are listed, all in the age range 19-22: a cook, a maidservant and a boarder employed as a ‘farmer’s assistant’. Charles Robinson may simply have been located outside the parish during the census period. By the time of the 1899 Kelly’s Directory, Alfred Turner, the ‘farmer’s assistant’ from eight years earlier, has been promoted to ‘farm steward’ to Charles Robinson.

The 1905 and 1911 editions of Kelly’s Directory show that Truleigh Farm was then the hands of Harry Strivens of Paythorne Farm and a member of a family whose recorded residence in the parish dates back to the eighteenth century. The 1915 edition has Henry Uridge listed as the farmer. He is still listed as a farmer in the 1922 edition but may have been living in Fulking then rather than at the farm itself. 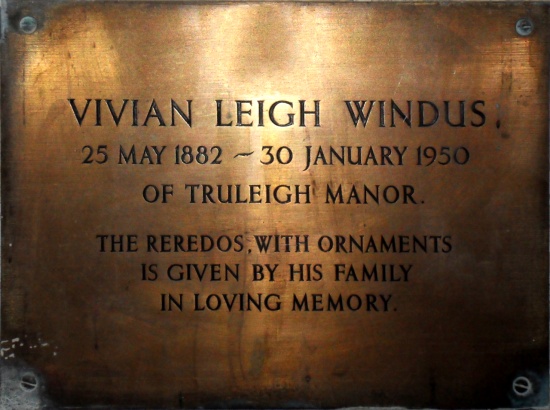 Charles Wyndham, Lord Leconfield, inherited the freehold of the farm and he sold both the land (in 1920) and the house (in 1925) to John C. Buckwell. He, in turn, resold it to a Captain L.N. Masters in 1927. And the latter sold it to Vivian Windus in 1933. When Vivian Windus died in 1950, the farm passed into the hands of his son Robin and his family who live there to this day.

There are two cottages in the farmyard area: Keeper’s Cottage, located near the farmhouse, once housed two families and provided accommodation for the keeper who managed the game raised in the nearby woodland; and Pond Cottage, just to the north. The farm buildings mostly date back to the 1800s and at that time the entire holding totalled some 840 acres. Today, the farm extends over 420 acres, mainly arable, which has resulted in most of the farm buildings becoming redundant. They are now used for other purposes and the farmyard has become, in effect, a small industrial estate.

Truleigh Manor Farm as it appears in the 1842 Edburton tithe map. The farmhouse is marked in red, the pond in blue, and the two cottages are to the immediate west of the track that leads north. The pond has gone but very little else has changed topographically in the ensuing 170 years.

In 1963, Robin Windus and Tony and Elizabeth Baldwin founded Edburton Plant Hire. The Baldwins lived in Keeper’s Cottage and the firm was based in, and operated from, the farmyard. The name has changed to Edburton Contractors Ltd. and the Baldwin’s son Martin now runs the company, but it still uses some of the farmyard buildings as offices and an adjacent area as a storage yard for plant and other equipment. The company undertakes work for local highway authorities and its core business involves ground works and civil engineering projects.

Around 1967, two carpenters set up at the farm and they are there to this day, working from converted cowsheds. Until 1974, some of the farm buildings were used as a centre for crafts and small artisan industries and, in 1983, beer brewed there by the former Sussex Breweries was distributed to more than twenty local free houses. From 1980 to 1992 Sky Systems made microlight aircraft, and later powered hang gliders, in some of the outlying farm buildings. Today these buildings are used as a riding stables and by a company that makes stainless steel kitchenware for the commercial market. A fireworks supplier, Windus R & S, also currently operates from the farm. Since the 1960s there has been a small, private grass airstrip on the farm and this is still in use. Paragliding enthusiasts are trained in a field on a lower slope on the north side of the Downs, opposite the farm.

Truleigh Manor Farm: the farmhouse in 2013