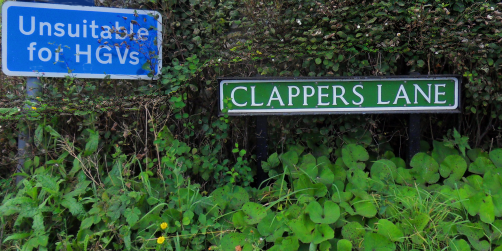 Facilis descensus Averno .. sed revocare gradum superasque
evadere ad auras, hoc opus, hic labor est.
Nowadays the primary function of Clappers Lane, residents apart, is to act as a Bermuda Triangle for credulous users of satellite navigation devices. But, until the road to Poynings was built in the early 1800s, Clappers Lane provided the only public route into Fulking and Edburton from the north. So it is a matter of some interest to ascertain how this once significant thoroughfare came by its curious name. The answer lies in the streams that cross the lane.

Anthony Brooks tells us that:

Until the early 1900s Clappers Lane flooded in three places: by the entrance to Brook House, [at] a ford just north of Knole House and at the junction of Clappers and Holmbush Lanes. Today, the streams at these locations now run under the carriageway, but before that, on the west side of the ford near Knole House, there was a simple, raised footbridge constructed of boards placed length ways. [2008, page 62]

The bridge over the stream just north of Knole House (looking south)
Clapper is an ancient local word for a bridge across a stream formed by laying a plank on piles of stones, or a similar raised footpath for pedestrians alongside an occasionally flooded lane. According to the English dialect dictionary, a correspondent of Notes and Queries wrote in 1880 that “we have here [at Edburton] a lane called Clappers, so named from its ‘clapper,’ i.e. a raised footpath at side, to keep foot-passengers out of the water”. John Rowe, Lord Bergavenny’s manorial steward in the early seventeenth century, tells us that there were clappers at Fridayesmead, Sandstrete and “in ffulkinge”. F. A. Howe equates the first with the field still marked as Great Fridays on the 1842 tithe map (see 130 on the map below); the second with one which “survive[d] unused” in his day (1958) over the northern branch of the local stream in Clappers Lane, previously known as Sands Lane; and the third with a spot “on the main road where the stream crosses under Stammers Hill near the sheepwash”. These arrangements were obviously of long standing, because one of these, or one in a parish close by, gave its name to John atte Clapere (‘John at the clapper’), recorded in a nearby hundred in 1332.

The bridge over the stream by the entrance to Brook House (looking north)
Anthony Brooks takes up the question of the word’s origin on page 62 of his book. He says that it arose from the fact that the planks were partly unsecured, and “clapped” when walked on. However, clappers in other parts of the country, especially Devon, were made of heavy stone slabs, so that cannot be the whole story; and it cannot be true as early speculators thought, that the word derives from clapboard, which the name of John in 1332 also proves. Clapper also meant ‘stepping stones’, according to the English dialect dictionary, so wood is clearly not a necessary component of the definition. 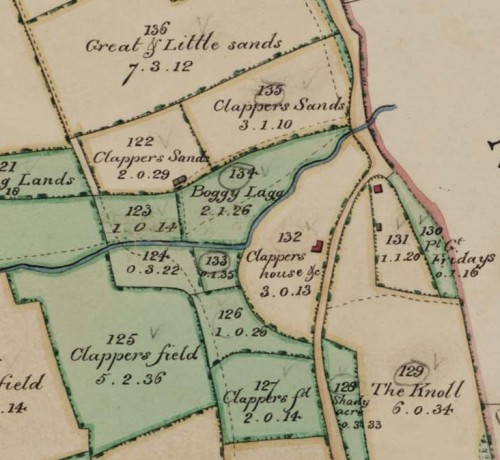 The 1842 tithe map showing “Clappers house &c”
The first record of the property called Clappers is in the parish registers in 1652: the burial of “the wife of Thomas Smith of the Clappers” (Howe, page 20); and a house with that name shows up on the 1842 tithe map for the parish of Edburton (see 132 on the map above). Thanks to the 1841 census we even know who was living in Clappers at the time. Members of that family were still living in the parish in 1881. The property makes repeat appearances, in the same location*, on the Ordnance Survey maps of 1898, 1920, 1940-45, and 1962. The original house no longer stands but has been replaced by Brook House which is located in a different part of the property (Brooks 2008, page 83). As can be seen, the property borders the stream that runs along the southern edge of Boggy Lagg and crosses the lane just below Clappers Sands where Brookside stands today; and, as noted above, this was the location of a clapper that lasted into the twentieth century.

There are two plausible hypotheses as to how the property came by its name:

Finally, the property would have given its name to the lane, previously known as Sands Lane, that ran alongside it.

*The current Clappers House is not in this location. It is further north, at the summit of a hill and thus far from both streams and clappers. Anthony Brooks reports that it was built and named after 1961 (2008, page 80).

With thanks to Nigel Vincent for the quotation from Vergil and to the local history editor for his help with research assistance and access to local material.