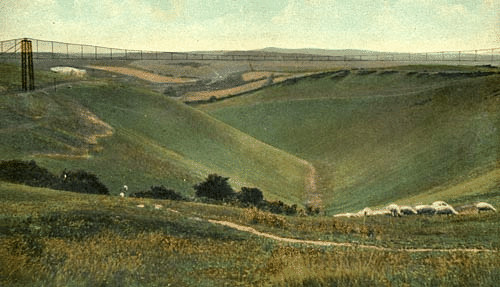 As the illustrations on this page attest, there was once an aerial cableway across the chasm that has become known as the Devil’s Dyke. An early representation of it is a rather primitive sketch that appears in a book by William Axon that was published in 1897, some three years after the cableway opened.

The caption to Axon’s drawing refers to an ‘aerial railway’ rather than an ‘aerial cableway’ which is the term that Clark (1976) uses. Many other terms are used in the literature on such systems: ‘aerial ropeway’, ‘cable car system’, ‘overhead tramway’, ‘passenger ropeway’, ‘suspension railway’, ‘wire rope tramway’, and so on. However, since Clark’s booklet is the best available published source on the Dyke installation, his terminology is adopted here.

The Dyke Railway had begun services in 1887 and James Henry Hubbard, the most energetic Dyke entrepreneur, had bought the hotel and the estate in 1892 and immediately set about exploiting the increase in visitors that the opening of the railway permitted. Thus, on a single public holiday in 1893, he was able to boast of 30,000. The aerial cableway was but one of Hubbard’s ambitious portfolio of attractions designed to boost the visitor numbers yet further. It was first mooted in 1893 and constructed in 1894. It was designed by William Brewer, a civil engineer and inventor.

The installation consisted of 12,000ft of cableway stretched across the ravine. The track cables were suspended from a catenary cable by a series of cast metal supports, having two arms extended outwards and joined to the catenary cable by a vertical rod. The track wheels supporting the cars passed over these anchors, and they were adjusted to preclude all possibility of their running off the tracks. One set of wheels controlled the opposite set. The cars were moved by an endless cable worked by a Crossley’s patent oil engine adjacent to the north station and not by electricity as envisaged in the original proposals. [Clark 1976, page 47] 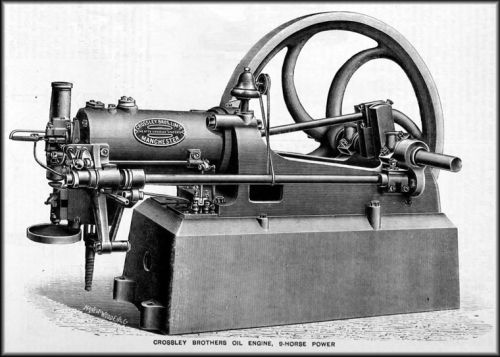 One particularly novel feature was the continuity of the line which passed through supports at stated intervals. In other contemporary systems the line would be confined to two given points, necessitating the unslinging and restarting of the cars. There were two cagework cars in use, each seating four passengers and the time taken to cross from one side to the other was about 2 minutes 15 seconds. There were small stations either side of the ravine approximately 1,100ft apart. The height of the cableway from the base of the chasm was 230ft and the clear span between the two huge iron columns supporting the catenary, and embedded in solid masonry, was 650ft. .. The cable rails were less thick than the catenary cable and even if one of the cables parted the stability of the cars would not have been affected, the support provided by the duplication of cables ensuring the cars being maintained in an upright position. [Clark 1976, pages 47-48]

Looking across the Dyke from north to south: note the station to the left and the rectangular gap in the pylons through which the cars and the endless cable passed — a key feature of Brewer’s design.

There are three useful ways to evaluate the cableway: (i) as a magnet for day-trippers to the Dyke; (ii) as a public transport link between Poynings and Brighton; and (iii) as an engineering demonstration. These will be considered in turn.

Today, all that is left of William Brewer’s magnificent piece of engineering are two ugly chunks of concrete positioned either side of the Dyke. No visitor unfamiliar with the history would guess that they once supported a graceful iron and steel suspension bridge.

The remains of the foundations of the northern pylon: a relic that only an industrial historian with a speciality in Victorian concrete could love. 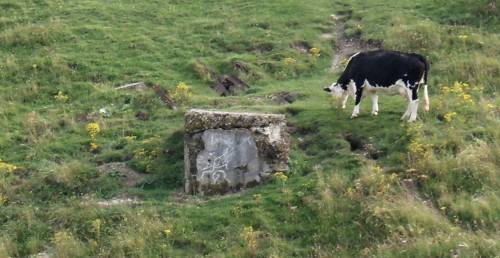 A bovine archaeologist pursuing field work in the area around what is left of the foundations of the southern pylon.

*In reality there were more than two cables involved: the catenary at the top, two for the rails (one in each direction) the cable loop used for towing the cars, and additional cables to brace the pylons.