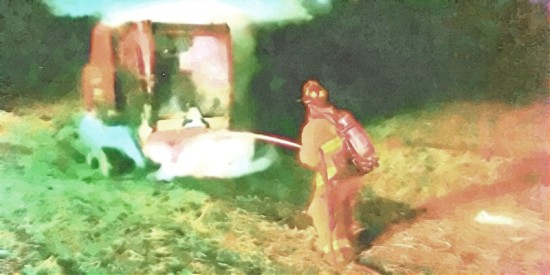 Three-quarters of a ton of hay went up in smoke on the A27, closing the eastbound carriageway for two-and-a-half hours. Fire crews had to use pitchforks and tools to stop the blaze inside an agricultural hay baler at 8:45pm on Tuesday. The quick-thinking driver of the tractor towing the baler managed to detach it before it spread to his vehicle. Two crews from Shoreham attended and called two more fire engines from Hove when it became clear that they would run out of water. The fire happened between the A283 Steyning Road junction and the A270 Upper Shoreham Road junction, where there are no fire hydrants.