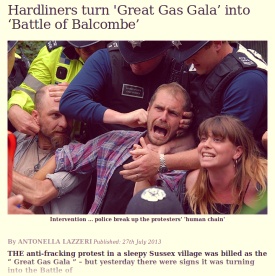 [Note: Cuadrilla is prospecting for oil, not gas, in Balcombe.]

News that you may have missed

“The rock in the Weald is splendid, it’s extremely good for shale oil,” said Fivos Spathopoulos, a visiting lecturer of petroleum geology at London’s Imperial College who studied the basin for about seven years. “If it works, it’ll be big but we won’t know exactly how big until we drill.” [Bloomberg, July 1st]

“In November, Europa .. applied for an order to quash the decision of the appointed Inspector .. to dismiss an appeal, made by Europa, against Surrey County Council’s refusal to grant planning permission to drill one exploratory bore hole and undertake a short-term test for hydrocarbons at the Holmwood prospect. On Thursday judge Mr Justice Ouseley gave judgment in favor of quashing the Inspector’s decision .. Europa CEO Hugh Mackay commented .. ‘allowing conventional exploration to take place at Holmwood is consistent with recent government initiatives to promote hydrocarbon exploration in onshore UK.'” [RigZone, July 25th]

“Some privately talk of the Weald in the terms of a potential Eagle Ford of Europe, matching much of the same characteristics of the European Bakken just over the Channel in the Paris Basin [PDF]. At a private investor conference last year the Weald potential was described in just those terms and the speaker talked of similar production of 400,000 barrels a day. Never mind that the Eagle Ford this year is pushing 600,000. At 400,000 barrels a day at $105 Brent that’s a tax take of £6.2 billion.” [NotHotAir, July 28th]