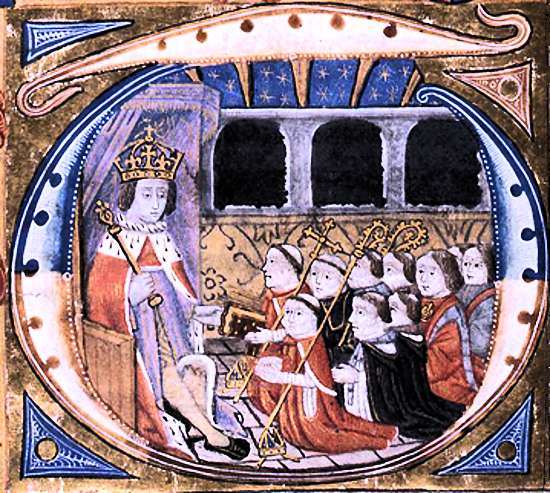 King Henry VII in the Star Chamber, July 1504
Over the centuries, residents of the parish of Edburton have been involved in all kinds of litigation. But the available records only document a single occasion on which one of these affairs ascended to the legal stratosphere that the Star Chamber used to represent. The case involved twenty oxen that may, or may not, have been stolen from Perching Manor.

Interrogatories to be ministered to John Cooke of [Edburton], co. Sussex, yeoman of the Queen’s Guard, and Thomas Cooke, his brother, concerning the unlawful taking and detaining of twenty oxen which were late of the goods of Edward Lawes, late of Pearching, “ffealon of hymselff”.

The interrogatories inquire (1) how many, and the names of those who took the cattle out of the pasture at Pearching, after the death of Edward Lawes; whither the oxen were driven, and in whose keeping they are; (2) Whether Edward Lawes did in his life-time sell the said oxen to John Cooke and William Davys, and for what sum of money, and upon what conditions.

John Cooke of Edburton deposes that the oxen were taken by his brother, Thomas Cooke, at his commandment, in the high way at Edburton, and driven to Waltham in Essex, and that eighteen were sold to Mistress Stacye, and two to a servant of Mr. Wrothe.

Thomas Cooke of St. Martin le Grand, in the City of London, haberdasher, deposes the taking of the oxen to Waltham.

The outcome of the case is unknown — the relevant documents disappeared in 1719.
[Excerpt from Percy D. Mundy, ed. 1913 Abstracts of Star Chamber Proceedings relating to the County of Sussex, Henry VII to Philip and Mary, Lewes: Sussex Record Society, page 102.]