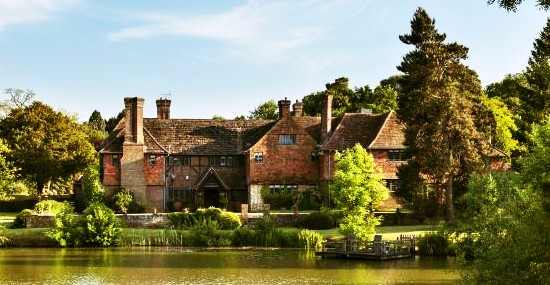 Country Life does the history:

Set in 149 acres of lakeside gardens and grounds, pasture, deer park and woodland, the house, first mentioned in records of 1339 and 1434, has evolved over time around the core of a late-medieval stone building, of which only one storey survives, with an early-17th-century, timber-framed first floor above it.

According to its listing, the south parlour was rebuilt in the early 1700s as part of a new five-bay range running eastwards, and the entire house was refaced in about 1920, and extended to the east, west and north, in the revived Sussex Vernacular style, par timber-framed and part tile-hung. The park, restocked with deer by the current owners, who bought Woodmancote Place in 2002, was established in the late 19th century; the gardens around the house were laid out by Cheals of Crawley in 1923. As the chief manor house of the village, Woodmancote Place has had its share of famous-and infamous-owners.

In 1530, Woodmancote passed to Catherine, wife of Sir Edward Seymour, later Earl of Hertford and 1st Duke of Somerset, who was executed for treason in 1552. In 1531, Seymour sold the manor to Richard Bellingham, whose widow married George Goring, described as lord of the manor in 1560. For 200 years from 1693, the estate was owned by the industrious Dennett family, who extended the house and increased the farmland to 402 acres by 1840.