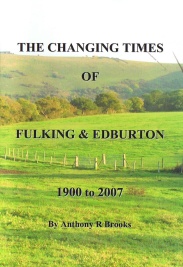 I would like to update all those who sponsored or purchased my book [Anthony R. Brooks (2008) The Changing Times of Fulking & Edburton. Chichester: RPM Print & Design] how the proceeds of £3,800 have been spent by the Church.

Originally it was earmarked for a new door to be added to the church entrance. After much thought the PCC decided that as the Church is used during the winter months twice a month for a maximum of two hours, money spent on a new door would not be cost effective. So a compromise was agreed:

I am pleased to say both projects are now complete.