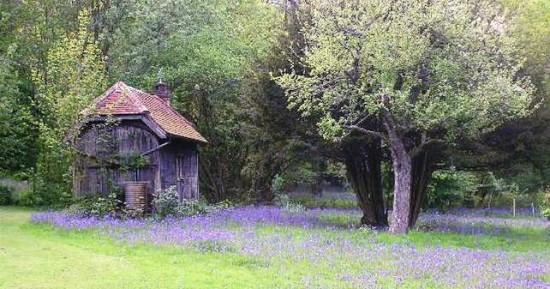 Oldwood occupies the south west corner plot at the junction of Bramlands Lane and Clappers Lane. Originally part of a large apple orchard, it was the third of the five-acre plots bought by Ernest Black. In 1912 an attractive thatched cottage made from an old railway carriage was originally situated on the site, but this burnt down in 1933. Ernest Black then sold the property to an American who used it as a holiday retreat. It was purchased next by Harold Alfred Manhood (1904–1991) — an author noted for his short stories who named the place Manhoods and for some years lived there first in another railway carriage and later in a bungalow with a garage that he had built on the site. Villagers recall that H.E. Bates and Harold Manhood were great friends and it is thought that Bates wrote The Darling Buds of May (later to become a successful TV series) while staying with Manhood in 1958. .. On Harold Manhood’s death the property was sold to a retired farmer who added a barn to store his collection of old, working, farm machinery.