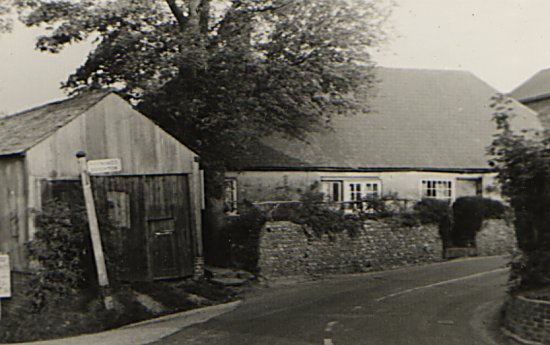 The original Yew Cottage as it was in the early 1950s with a wheelwright’s shop on the left.

Mr Cuthbert Radcliffe, a London solicitor, once owned much of Fulking, including the original building that comprised Yew and Clematis Cottages. In 1922, he sold it at auction for £260 to Thomas Hills who ran an adjacent market garden and probably let the cottages to his workers. At the time of the sale, the building was divided into two separate cottages but they had once formed a single dwelling. 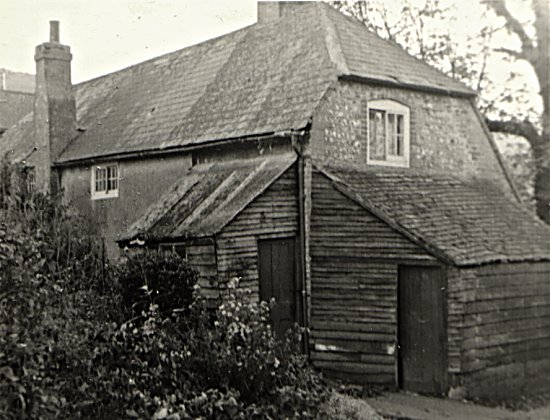 The back of the original cottage in the early 1950s
By the early 1930s the two cottages had been converted back to one dwelling called Yew Cottage. Externally it looked the same and it still retained the old wheelwright’s workshop, stables and outbuildings. From 1933, Albert Browne, a former manager of the Dyke Hotel, lived there with his wife, his daughter Irene (‘Bubbles’) and her children, and his three sons Ken, Vernon (‘Freddie’) and Gordon. Albert and his three eldest children all served in WWII and Albert was awarded an OBE for his work on the Mulberry Harbour project. Mr. Browne always claimed that his was the first house in Fulking to have electric light when electricity came to the village in 1935. It seems that he installed wiring in the cottage himself in advance and had it certified as safe by the Electricity Board, in readiness for an immediate connection. In 1947, he recorded some notes for the Village Scrapbook about the original ‘Yew & Clematis Cottage’:

So named from the Yew tree and Clematis which once graced the front of the cottages. Estimated to be about 400 years old; was formerly two cottages each containing four rooms.

Built of rock — the walls of which have in recent years been rendered with a covering of concrete — and timbers from ancient ships, is structurally very sound, but attention is sadly needed to its decaying doors and window frames. The roof was originally of thatch but, within the last century, has been replaced with slates.

It is a great pity that our Minister of Health cannot see his way to adopt the Hobhouse Report[1] of 1946, which recommended the restoration of such property. What a blessing would be conferred on the occupants of this and many other rural cottages.

The West cottage, ‘Yew Cottage’, was, in the dim past, used by the inhabitants of the village and surrounding cottages as a bacon curing centre, and many hams, hands and sides of pork have been ‘cured’ in its enormous open fireplace, still extant.

The hut adjoining Yew Cottage was used for many years by the Barber family[2] as a carpenter’s and wheelwright’s shop, and many Sussex wagons have trundled from beneath its roof. In later years (within the memory of the occupant), this hut was used as a School for Carpentry and Joinery and was attended by many village lads. In those days, there were very few counter attractions, the distant ones being available only to the fortunate ones who possessed ‘cushioned’ tyred bicycles.

Its water supply, before the installation of the ‘village pump’, was from a now covered-in well in the scullery, still intact beneath its crust of concrete. The present tenant has often been tempted to tap this supply, using it in preference to the present one, which has been the cause of many ‘cuss’ words on finding an exhausted water store when, at the ‘crack of dawn’, he arises to have a ‘brew up’.

One day perhaps, in the remote future, we may be blessed with H. & C. and W.C. E.L. [electric light] we already have. 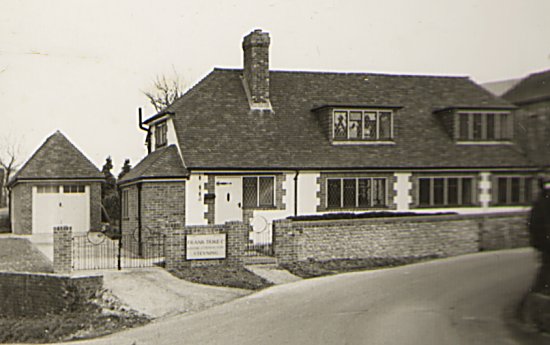 The replacement cottage immediately after completion in 1957
Ross and Zeffie Jeffries purchased the cottage in 1956 and they undertook considerable renovation works, which were completed in 1957. The building was almost entirely demolished, along with the wheelwright’s workshop and other outbuildings, and replaced with a similar sized, modern bungalow and detached garage. To comply with conditions attached to the planning consent for the new bungalow, it had to be no larger than the original building and had to retain some of the features of the original cottage. However, on the new building the dormer windows faced the road, whilst on the original cottage they were at the rear. It seems likely that the current name, ‘Yew Tree Cottage’, was adopted after the 1957 reconstruction.

A short history of Yew Cottage was published a few years ago so we now mention the alterations which have recently been carried out by the owner. As will be seen from the photograph [above], its ‘face’ and in fact its interior have been completely altered, and although it is a pity to see the old building so altered we must admit that the builders have succeeded in producing an artistic effect on modern lines, and in keeping with the village. A pleasing garage has been erected in place of the old smithy’s building which was, after all, a bit of an eyesore, and formed a blind corner, dangerous to pedestrians and motorists alike.

After Zeffie Jeffries died in 2002, it was sold to the present owners who added a two-storey extension to the rear of the bungalow in 2006 and incorporated a double garage. 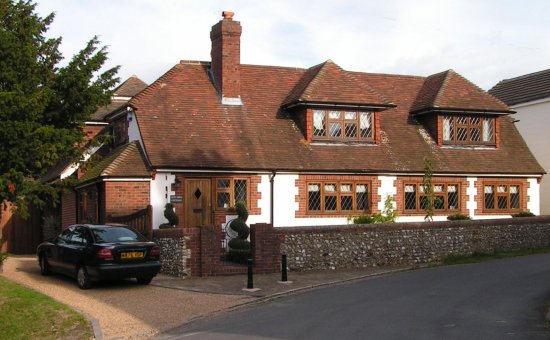 [1] The Hobhouse Report led directly to the National Parks and Access to the Countryside Act 1949 which created the original National Parks. Sir Arthur Hobhouse had recommended that the South Downs be included. Six decades later it was the last on his list to be so designated.

[2] Members of the Barber family lived in Fulking for much of the nineteenth century. The 1841 census records list George Barber, who was born in Poynings, and his son Nelson as carpenters. By 1861, three of his sons, Nelson, Alexander and Charles are all working as carpenters. In 1881, George, now aged 82, and his son Charles are still in the village working as carpenters. George died in 1887 at the age of 88 and the then rector, Francis Gell, wrote “My dear old Clerk” next to his name in the Parish Register. George’s branch of the Barber family may well have lived in Yew and Clematis cottages.