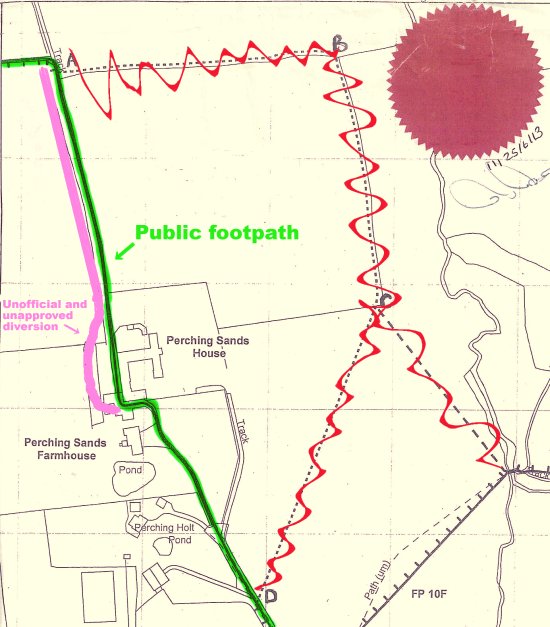 The DEFRA inspector charged with deciding whether Footpath 4f should be rerouted has ruled that it should not be. He concluded “that the adverse effect on the public’s enjoyment of the path if it were diverted in the manner proposed would be significant” and “the adverse effect on public enjoyment clearly outweighs the benefit .. to the landowners”. The proposed diversions (crossed out in red, above) will thus not come into force. Instead, the historic route (marked in green, above) retains its status as a lawful right of way. Here are some extracts from his report:

The public right of way has been obstructed in the vicinity of Perching Sands House. For the purposes of assessing comparative convenience (and enjoyment) I take into account the lawful right of way, treating it as if it was open and available for use, and not the unofficial and unapproved diversion which has been created by the landowner.

From the northern end of the curtilage of Perching Sands House to point A the right of way (although not the path provided by the landowner which lies immediately to its west) runs along a track with a good hard surface which seems unlikely to be muddy in wet weather (the site visit was carried out during a prolonged dry spell). The Definitive Statement for the path does not list any stiles or gates as lawful limitations on the public’s use.

It is reasonably clear where the path runs (or should run), and the correct route could be emphasised by signage so that there was no danger of people inadvertently wandering off the public right of way.

The full report is here [PDF].