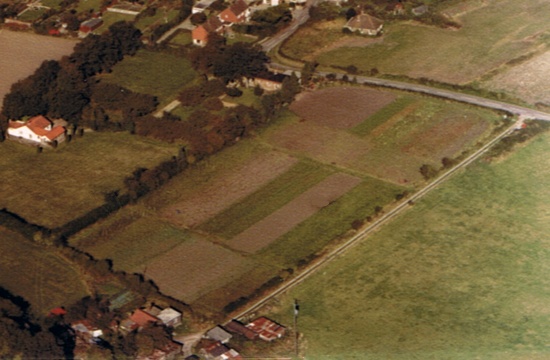 An aerial photo of Hut Farm by Joe Lancaster, taken around 1980. The farm buildings are bottom left, Pippins and Poynings Road are top right.

Hugh Rapley used to live in Clappers Lane and he and his family left many many imprints on Fulking which still echo in the village. Hugh and his brother ran the market garden and dairy from Hut Farm (see photo above). The cows fed in the field which is now the smooth green cricket club pitch (Preston Nomads). Their milk was still being delivered around the village in the mid 1980s. And Hut Farm? Now transformed into Cannonberries, a single storey dwelling precisely on the site of the old farm buildings with extensive and elegant gardens where the long strips of the fuit and veg had grown for years.

Hugh had an interest in clocks especially old clocks. He could mend neighbours’ clocks and he restored beautiful old clocks and sold many of them in the village shop. People were often very surprised having come in for an ice cream to then see these working antique clocks at very modest prices alongside collectible old books, local pottery and paintings, local bread, baked beans, butter and a post office.

Before the war Hugh’s cow field had been the village field, I was told. And our current village field (North Town Field)? That was probably a cow field. And Barn Cottage, in the north west corner of old Hut Farm? Exactly what it says: a bungalow built ‘inside’ a barn when planners said ‘no’ to proposed demolition. 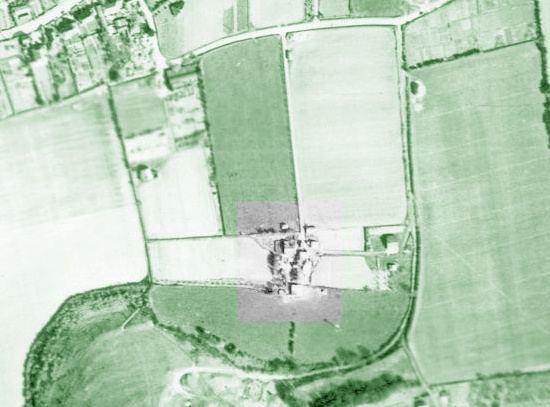 Another aerial photograph of Hut Farm, this one taken in 1946