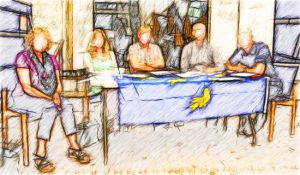 Minutes of the Fulking Parish Council Planning Meeting held in the Village Hall, Fulking on Tuesday 12th February 2019 at 7pm

The following matter was discussed:

The meeting opened at 7.03pm

There were four members of the public present at the meeting with two residents speaking in favour of the development, commenting that the current house built in the 1950’s was now in poor condition and that replacing the building with a more efficient property in keeping with the local area was an asset to the village.

The chairman ran through the application documents for the meeting so that everyone had a clear picture of what the new property would look like when finished. Councillors were advised that all development traffic approach the site from the north via the A281 rather than through the village and will endeavour when practical to do so, use smaller delivery vehicles to reduce damage to Clappers Lane.

Councillors considered the application as an environmentally friendly development and in keeping with the landscape.

The resulting vote on this application was unanimously to SUPPORT it.

The meeting closed at 7:23pm