Septima Cottages is a Grade II listed building on the corner of The Street in Fulking as it turns south down to the Shepherd and Dog. During its long history it has, at times, comprised one dwelling or two (as it is now). The listing details are terse, as usual:

Howe (1958, page 32) refers to “an outshut wall built in masonry which may be mediaeval” and provides a much more informative description written by Albert Paulin who was living in Septima during the 1950s:

Date uncertain but said to have been in existence in 1643: first recorded date 1812 (Conveyance: purchase from H.M. Commissioners of Woods and Forests at price of about £60): Original brick floors on ground floor, apparently laid on some such base as puddled clay. They are very dry. Upper floors, original wide board, approximately 18 inches wide: appear to be mixture of oak and chesnut. Roofing tiles mainly original, pegged to oak battens with oak pegs. Two windows have original leaded lights with flint glass. Bread baking ovens well preserved. One original staircase still in use. Much of the brickwork up to first floor level appears to be original. Inside partitions plaster and lath between original oak vertical puncheons. Roof carried by heavy oak tie-beams, curved to give headroom over door openings, but even so, a bare five feet headroom. [Howe 1958, pages 36-37.] 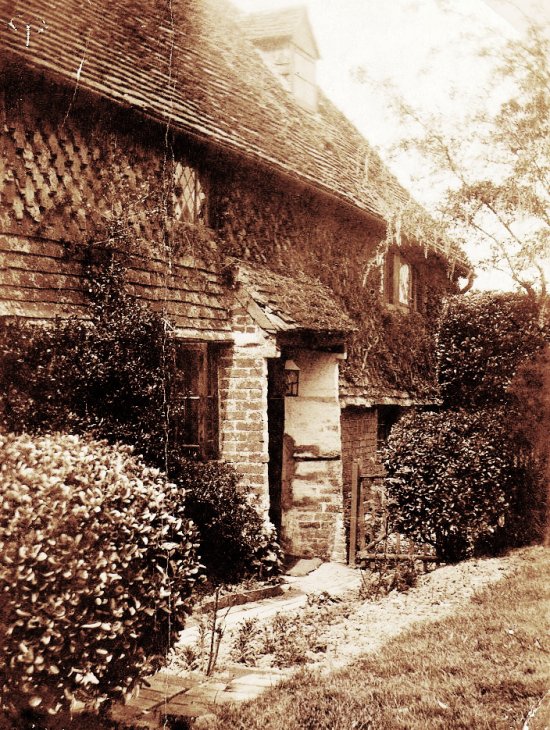 The building was sold as two tenanted cottages in 1914. The auction particulars showed Number 1 as having two bedrooms, a living room with an oak timbered ceiling and chimney corner fireplace, a washroom with a copper and a pantry. Number 2 was described as a creeper-clad cottage with one bedroom, a living room with an oak timbered ceiling and open fireplace, a small sitting room, a washhouse and a privy shared by the two cottages (the creeper was still thriving in 1999). Primrose Cottage, which is next door, was sold at the same auction and there was a covenant to ensure that the occupants of Septima would have continued access to its well. The Septima cottages were let at the time of the auction for between two and three shillings a week each, around 10% of the then current wage for an agricultural worker.

The building owes its name to Ann Septima Cuttress who was born around 1839 and who lived in the cottage for most of a long life. The name probably originated as the simple description “Septima’s cottage”. Ann’s father James had been born in Fulking in 1797. In 1841 he was working as a market gardener and living with his wife Mary and eight daughters in what the census calls ‘Lower Paythorn’. Mary died in 1846. After his wife died, James moved to Septima. In 1851, he was living there with his two youngest daughters, Ann and Barbara. He was still working as a market gardener. In 1858, Ann married Benjamin Baldey, a farm worker originally from Falmer, and he moved into the cottage. Ann was a minor (under 21) at the time of her wedding and thus required her father’s permission to marry. Benjamin was ten years her senior. The 1861 census shows them with two daughters and with James, now in his sixties and working as a shepherd, living with them as a lodger. He was still there in 1871, retired from shepherding but surrounded by half a dozen grandchildren. He died a couple of years later at the age of 76. Ann was to have a total of fifteen children, at least three of whom died in infancy. One of her sons, Charles, became the publican at the Shepherd and Dog and one of her grandsons, also called Charles, is commemorated on the 1914-1918 war memorial in Edburton churchyard.

In 1914, Ann and Benjamin were living in Number 2 and their son Percy was living in Number 1 with Nanny, his wife, and their children. Although they were tenants, the building had remained in the ownership of the Cuttress family until the auction in that year. Benjamin Baldey died in 1915 at the age of 87. Ann remained in residence and, when the war ended, she converted the small dining room of Number 2 into the village sweet shop. The entrance was via a stable door situated where the oriel (bay) window is now located. Ann also served teas in the garden and took in lodgers, some of whom were artists. She died in 1925 at the age of 86 — she had lived in Septima for nearly eighty years. 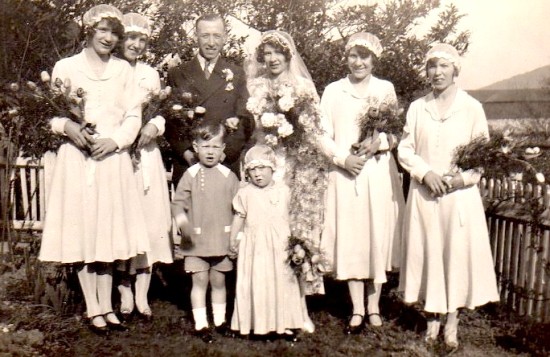 In the 1920s, a Mr and Mrs Purdew were photographed outside their new home, Number 1, on their wedding day. Mr Purdew was probably a descendant of the Purden/Purdew family that lived adjacent to the Baldey family in the 1870s. However, the Purdews had moved to Perching Sands by the 1880s.

In the 1940s, two sisters, Charlotte (‘Lottie’) and Marjorie Clark, lived in Number 1 and they went on to purchase Number 2. In her youth, Lottie had been a milliner and sometimes modelled fur coats complete with one of her hats for a London fashion house. During this time she was required to live in a staff dormitory, supervised by a matron who carried out daily inspections to ensure that all the girls looked their best and that no unauthorised changes were made to their appearance. Marjorie was musical and played the organ for the church and the piano for village concerts. She went on to marry Albert Paulin, a magistrate and an important figure in 1950s village life. They lived in Number 1 and Lottie moved into Number 2 where she lived until her death in 1976, aged 96. In due course, Albert and Marjorie Paulin moved to Thatchly, a distinctive 1930s house that is at the other end of The Street from Septima. Marjorie died in 1972, aged 76. 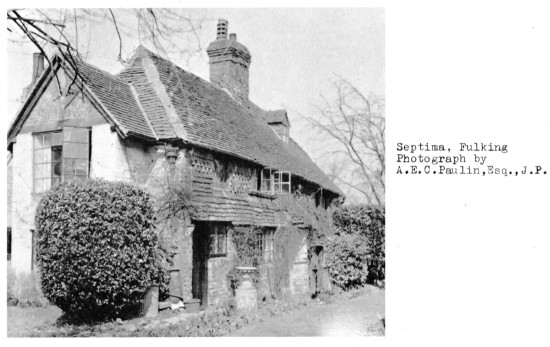 A photograph of Septima Cottages taken by Albert Paulin in the 1950s and printed on page 96 of F.A. Howe’s 1958 book on Fulking.

In the 1980s, Emile Curtis bought both cottages and set about supervising their renovation. Part of the garden of the Old Bakehouse had been purchased in 1981 and used to increase the size of Number 2’s garden. All the work undertaken on the cottages had to meet the strict criteria required for altering a listed building: the roof tiles were removed and refitted with new oak pegs and a damp-proof course was added by injecting a silicon solution into the solid exterior walls. The timbers were treated throughout with wood preservative, the cottage was completely rewired, new drains were constructed and the plumbing was replaced and updated. A hot water system and night storage heaters were installed. Finally, insulation boards were fitted to an extension and the front elevation and finished with hanging tiles. While work was in progress Emile discovered an interesting feature: back-to-back cupboards had been built between the two cottages that gave access to the next-door cottage. Further extension and refurbishment took place in 2005. 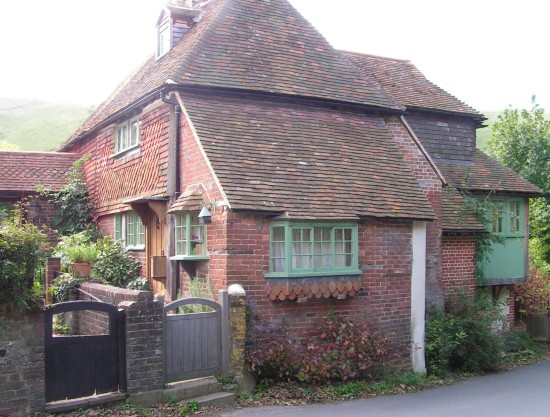