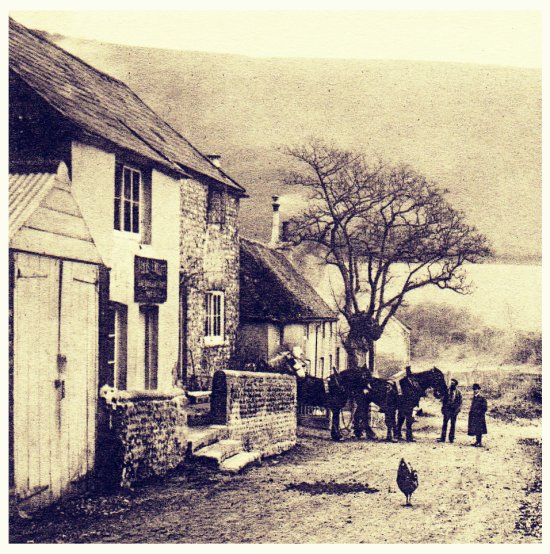 The Old Bakehouse viewed from the north, around 1900: the white rendered building with the sign above the door is the bake house, corn store, shop, and post office. It was demolished in the mid twentieth century. The flint-faced building to its immediate right is the cottage that one sees today. The Shepherd and Dog public house can be seen behind the horses and the Downs loom beyond that.

The Old Bakehouse is a Grade II listed cottage dating from the early nineteenth century. It has a slate roof and is faced with flints. It is believed to stand on the site of an earlier building, one that would have been built at around the same the same time as its immediate neighbour, the Shepherd and Dog public house (the earlier building may be the one whose roof can be seen behind the pub in this lithograph).

For most of the nineteenth century the building provided both a home and a workplace for members of the Willett family. Edward (born in Ditchling, c1796) and his wife Elizabeth (born in Hurstpierpoint, c1796) had moved to Fulking from Beeding some time between 1824 and 1831. They were living in the house in 1841 with their seven children and a male relative of Edward’s, probably his twin brother. Edward worked as a shoemaker with the assistance of his eldest son, also called Edward. By 1851, Edward Snr. had added grocery to his shoemaking business and now had the assistance of three of his sons. One of his daughters, Margaret, had become a school mistress at the local school, and his youngest daughter, Sarah, had gone to work as a servant for the Blaker family in Perching Manor. At some point Edward Snr. excavated the rock face on the west side of the house and built a wood fired oven, which became the basis of the bakery. Dough was prepared with yeast obtained from the brewery in Poynings and mixed with water that potatoes had been cooked in.

In 1853, Edward Jnr. married Ann Burtenshaw, a shoe binder from Edburton. They were to have four children. By 1861, they had moved out of the Old Bakehouse and were living elsewhere in the village. But both Edward and Ann continued to work in the family shoemaking business, as did Edward’s younger brother Joseph who was still living with his parents. The shop now included a corn store and the local post office franchise. Edward Snr. died in 1863 and his widow took over the shop. Joseph got married in 1866 and moved to another house in the village with his wife before moving to Poynings. Edward Jnr. had added market gardening to his portfolio of activities by 1866, perhaps to supply the family grocery. 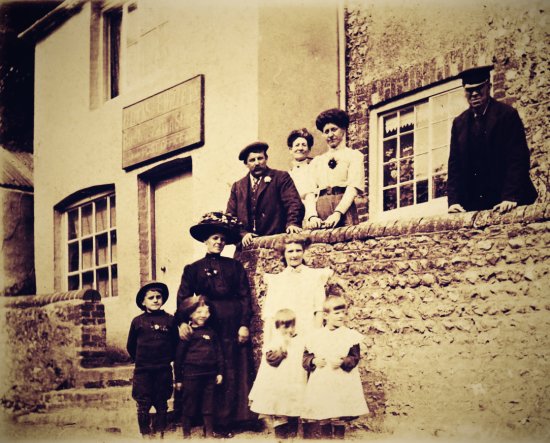 The Old Bakehouse in a photograph that was probably taken by an itinerant commercial photographer in the mid 1860s[1]: the sign above the shop reads “O.Lucas & E.Willett Bake house & Corn Store [illegible] POST OFFICE”. Standing in the centre, immediately behind the wall, is Edward Willett with his wife Ann. Below them is his recently widowed mother, Elizabeth, with her five grandchildren Edward, Percy, Rhoda, Abby, and Fanny. The woman standing behind Edward and Ann Willett may be Edward’s sister Sarah, the mother of Percy.

At the time the photograph above was taken, O[badiah] Lucas worked in the shop as an assistant, probably in connection the post office side of the business. He did not live in Fulking or Edburton. His son, also called Obadiah, was to marry Edward Willett’s youngest daughter, Rhoda, in 1891.

Some time after the death of his father and prior to 1871, Edward and his family moved back into the Old Bakehouse. His mother had moved to Cuckfield and died there in 1873. In 1871 Edward’s son was working as an agricultural labourer whilst his eldest daughter, following the precedent set by her aunt Margaret, had become a school teacher. By 1881, the household had shrunk to four with Fanny and Rhoda still living with their parents. The census lists Edward as a shoemaker and general dealer, his wife Ann as a baker, Fanny as a dressmaker and Rhoda as shopwoman. With the exception of the addition of a young female servant, the household was just the same a decade later. The 1891 census now lists Edward as a baker and grocer, Rhoda as a bakery and grocery assistant, and Fanny as a dressmaker. The Kelly’s Directory for 1891 continues to list shoe making as one of Edward’s activities. Rhoda married Obadiah Lucas Jnr. in December that year and left Fulking for some years.

At some point between 1891 and 1899, Edward took over the other shop in the village and moved his business there. The Old Bakehouse was sold with a covenant that prevented it being reopened as a shop. Edward died in 1905, the year after his wife. His new shop passed into the hands of Rhoda and Obadiah. 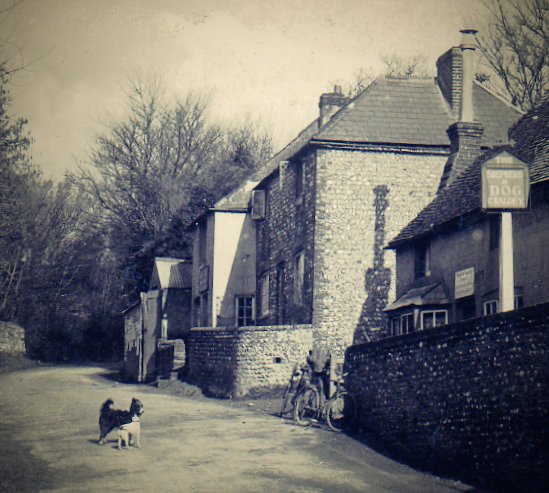 The Old Bakehouse viewed from the south, around 1900
In 1949 the property was sold to John Franks who submitted plans for demolition of the former shop and conversion of the 19th century cottage to form the dwelling that stands on the site today. One of the features removed was an outside staircase that gave access to a bedroom — not very pleasant on a winter’s night. He also cut away the rock in the area where a large garage stands today, to provide a level piece of ground for his pig and chicken pens. A quarry tile floor and a flight of worn steps was discovered in this area when the footings for the present day garage were excavated. What could be salvaged of these was incorporated into the top garden of the cottage. John Franks sold the property in 1952 and the new owners then rented it out. In 1981 part of the grounds was sold to the owners of 2 Septima Cottages to increase the size of their garden. The present owners purchased The Old Bakehouse in 1986. Like many other houses in Fulking, the cottage has been carefully restored and still retains certain original features, including wide, polished, floorboards and some internal doors. 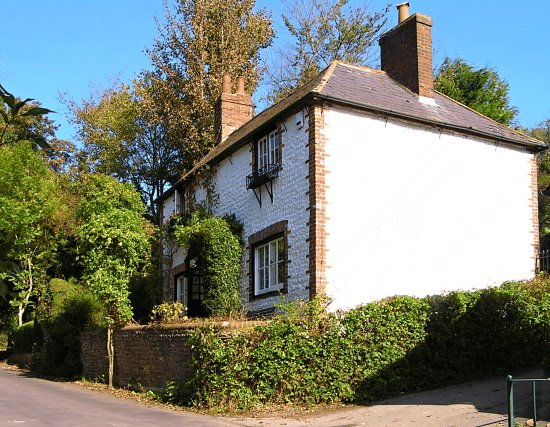 The Old Bakehouse in 2007
Tony Brooks

[1] Photography was a complicated and labour-intensive activity in the 1860s. Commercial photographers toured rural areas with large plate cameras and mobile darkrooms. Sunday was a favoured day since potential customers were already dressed for church. Note how the youngest boy (Percy) moved his head during the long exposure.