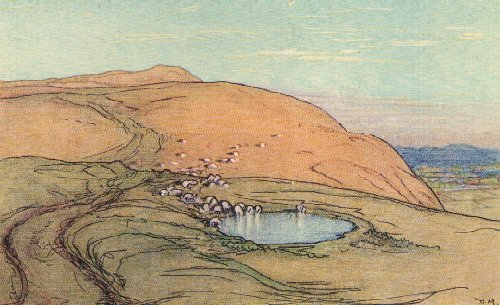 The National Park Authority reports that “there are approximately 300 dew ponds across the South Downs”. Of these, at least eighteen are within easy walking distance of Fulking. The closest is on Tenantry Down, immediately above the village. This post considers what these relics are, how they worked, and why they are there.

There’s no water on the top of the Downs. No streams, no springs, no lakes, and few naturally occurring ponds. The Downs are made of porous chalk rock. When it rains, the water drains straight through. Livestock need water to survive. In a world equipped with powered pumps, galvanized troughs, and tractors that can tow water tanks, the need is relatively easy to address. But efficient steam pumps only became available towards the end of the 18th century and tractors only at the end of the 19th century. In earlier centuries, the traditional way of creating a supply of potable water was by digging a well. But this solution is of very limited applicability on the Downs. The water table is a long, long way down. Excavating a deep well is difficult and dangerous — gas seeps into the shaft. And making use of it, once excavated, requires prodigious amounts of energy. Thus there are few wells to be found on the Downs. One that does exist is at Saddlescombe, which sits at a relatively low elevation of 410 feet (compare Devil’s Dyke at 680 feet). The well is 160 feet deep and, when it was in use, employed a donkey in a wheel to provide the energy needed to raise water.

For at least a millennium, dew ponds (also known as ‘mist ponds’, ‘fog ponds’, ‘cloud ponds’ and, somewhat unsurprisingly, ‘sheep ponds’) provided the solution to the water collection and storage problem on the Downs. We know that such ponds existed in Saxon times and it has been argued that their construction and use goes back much further. Dew ponds are shallow man-made circular ponds commonly lined with compacted (‘puddled’) clay or compacted chalk paste. Since the nineteenth century, concrete has also been used as a waterproof liner. Other components found at some ponds include straw, lime, chalk rubble, gravel and stones. In the nineteenth century and the early years of the twentieth century, specialist teams toured the Downs during the winter and spring months and built or restored dew ponds. It would take four men about a month to excavate and line a pond. Horses or oxen walking in a circle were used to compact the clay. 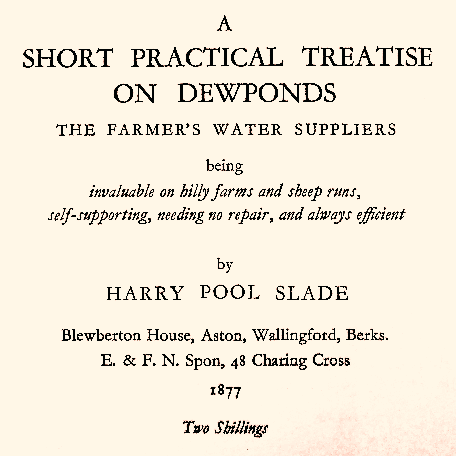 The life of a dew pond has been estimated at 100-150 years. Sustained extremes of temperature, whether high or low, can lead to the compacted liner developing cracks. And the roots of reeds or rushes can burrow through it. In the absence of maintenance, the pond starts leaking, the water drains out, and it grasses over. If it is still required, then it must be dug out and relined. Depending on the construction, the hooves of livestock can damage the lining and thus one sometimes sees a pond that is entirely fenced off but which supplies a nearby drinking trough via a pipe (the pond on Tenantry Down appears to involve this arrangement). Typical dimensions include a diameter in the range 30-60 feet, a depth of 3-6 feet, and a capacity of 10,000 gallons. Precipitation, at over 36 inches per annum, is the source of the water in dew ponds on the Downs. Evaporation reduces that amount by about half. Scientific controversy over candidate sources of the water in dew ponds persisted into the 1930s. Nowadays the ostensible motive for the restoration of dew ponds (as at Foredown Road), or even their creation de novo (as at Waterhall Bottom), is an ecological one. It is intended that they provide a habitat for amphibious reptiles, dragonflies, and waterfowl. 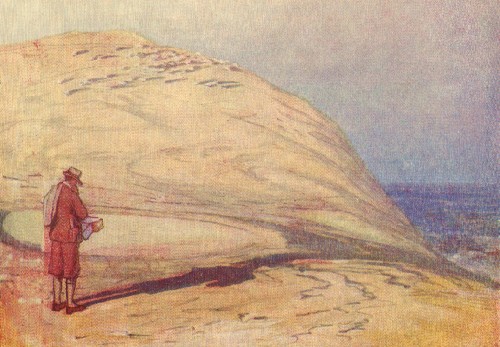 Frontispiece to Donald Maxwell (1932) A Detective in Sussex: Landscape Clues to the Riddles of the Past, London: Bodley Head.

Appendix: A gazetteer of dew ponds near Fulking.