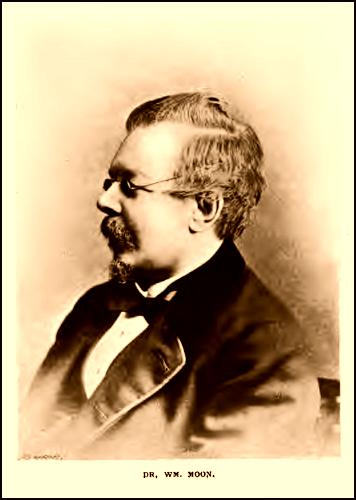 Dr. William Moon
[Image from Rutherfurd 1898, frontispiece]
William Moon (1818-1894) was the inventor in the mid-1840s of an embossed alphabet for the blind (known as ‘The Moon Alphabet’, ‘Moon type’, or simply ‘moon’). He and his two children devoted their lives to the development and promotion of this alphabet [Adelaide (1845-1914) in the UK, and Robert (1844-1914) in the USA]. William Moon was born near Tunbridge Wells and contracted scarlet fever as a child. This led to partial blindness which had become total by the age of 21. He spent his adult life living in Brighton, initially with his widowed mother and subsequently with his first wife, Mary, and second wife, Anna Maria. In his early years, he scraped a living by teaching other blind people to read by touch. In addition to publishing moon books, much of his later life was devoted to initiating and promoting local Home Teaching Societies, and their associated free lending libraries of embossed books, to bring literacy to the blind. During and after his lifetime such societies were set up in many parts of the world. 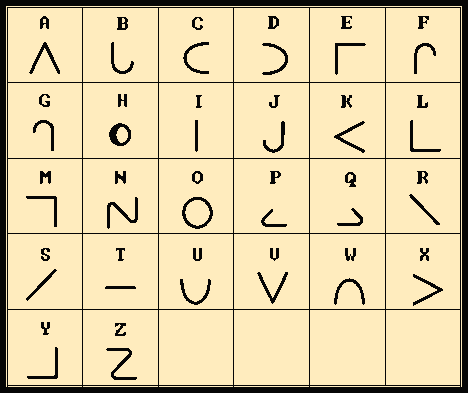 In France, Louis Braille (1809-1852) had invented the alphabet that bears his name as a blind teenager in 1824. It was inspired by a more complex French military system intended to allow soldiers to read in the dark. Although braille was eventually to become the standard alphabet for the blind throughout the world, at the time of Moon’s invention it was little known outside Paris and remained that way until after Braille’s death. In contrast to braille, Moon’s system is based on the standard alphabet. It comprises 14 symbols each with a clear bold outline used in various rotations. For many blind people, especially those who become blind late in life, people with a restricted sense of touch, and those with learning difficulties, moon is significantly easier to learn than the more abstract braille system. However, many people have also gained confidence from first learning moon and then moved on to learn braille. Compared to braille, moon had two main disadvantages: (i) texts written in moon were very bulky (the Bible required 4,000 pages spread over 58 volumes), and (ii) moon was laborious to write, even with mechanical assistance, whereas braille was relatively easy to produce. Despite these issues, moon was very successful in the nineteenth century. Moon remains in limited use to this day although the RNIB discontinued most of their moon products, courses and services in early 2012 [PDF]. However, the introduction of ‘dotty moon’ means that moon text can now be easily and cheaply produced using standard braille embossers coupled to a computer with the appropriate software. Such a system is currently in use at Linden Lodge School.

William Moon’s work led to various formal accolades during his lifetime, most notably the honorary LL.D. awarded by the University of Philadelphia in 1871 which gave him the title by which he is commonly known today. Something of Dr. Moon’s personality and method of operating is captured by the following anecdote taken from his unpublished autobiography:

At this point it is interesting to learn from Dr. Moon’s autobiography how he had approached the staggering problem of printing moon for the Chinese. He began by writing to the secretary of The British and Foreign Bible Society saying that he thought he could print some books for the blind in the Chinese language. The secretary replied “Do you not think it a great piece of presumption to suppose that you can do anything for the blind in China?”, “Not at all” said Dr. Moon “If I had I should not have written to you.” The secretary enquired what assistance he needed and was told, “Money and a Chinese dictionary,” Two days later he received a cheque for £25 and seven large quarto volumes of a Chinese dictionary and grammar. “To work I went” reads the autobiography “and studied the language and in short time was able to prepare a few texts of scripture in my simplified alphabet for the blind.” He was given the opportunity of meeting Mr. Hockee, a Chinese gentlemen, who helped him to prepare The Lord’s Prayer in the “Pekin Colloquial”. This was sent to the local missionary at Ningpoo, a Miss Alders. She liked it and ordered some portions of the Church liturgy and a chapter of St. Luke’s Gospel. This was immediately provided at the expense of a benevolent gentleman, Mr. Taylor, of Clapham Common. 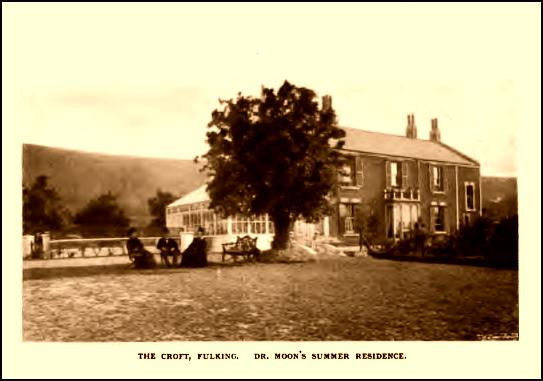 The Croft was built in 1890 as a summer residence for the Moon family. It replaced an earlier house on the same site, one that is recorded on the 1842 Edburton tithe map. It is a substantial property and sits well back from the road.

Early in the autumn of 1892 [Dr. Moon] was attacked by an illness which turned out to be a slight paralytic stroke. He was at the time staying at his country residence, The Croft, which he had built at Fulking .. as soon as he was able to go about again, he earnestly begged to be allowed to tell the “good tidings” once more in the Mission House which adjoined his grounds; and it was thought that it would be a comfort to him if he were permitted occasionally to give some public addresses to the people of the village .. He spent the winter of 1892 in Brighton, returning to The Croft as soon as the weather would permit in 1893. In order that he might take exercise easily whenever he chose, his daughter caused a perfectly level walk to be constructed around the lawn. The path was provided with a handrail, and by placing his hand upon it he could walk alone and with safety. In this way his health seemed to be re-established .. Even so near the end as the summer of 1894, when he returned to Fulking, he eagerly listened to the reports constantly brought to him from Brighton by his daughter, on whom there had lain for some time the chief burden of the work.

Dr. Moon had built the Mission House around 1890 on land next to his house that had been given to the rector, Francis Gell, and his successors by John George Blaker of Brighton a couple of years earlier. 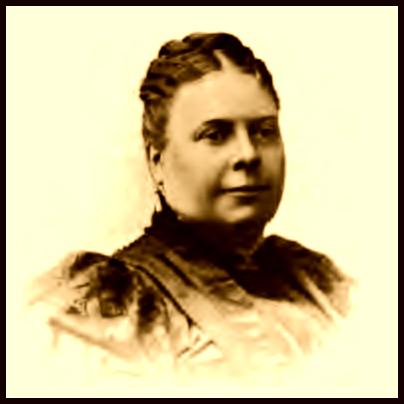 Adelaide played a major role in the success of moon. She helped to run the printing house at 104 Queens Road, Brighton that produced the many moon books that were sent out to libraries for the blind around the world. And it seems likely that she introduced the first moon typewriter in 1908. When she died in 1914, The Croft was left to Samuel Payne to live in for the rest of his natural life (he died in 1923). Members of the Payne family are recorded as living in Fulking from at least 1841 to the 1920s. And the relevant Kelly’s Directory has Samuel Payne living in Fulking House as of 1922.

The Croft later belonged to the Harris family who rented it out to Miss Atkins who was Clerk to the Parish Council (and also secretary of one or more other village organisations) and after that Edwin Harris lived there with his wife and family. Since the late 1970s it has changed hands several times until the present owners purchased it in 1997. A plaque to the right of the front door records the link to Dr. Moon. 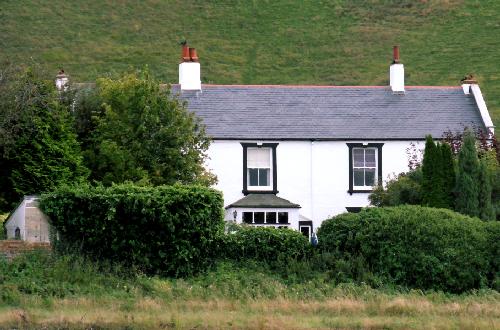 The Croft in 2012, viewed from the field behind the house

Appendix: further images related to Dr. Moon, his alphabet, and The Croft.

For more information about Dr. Moon and moon, see: