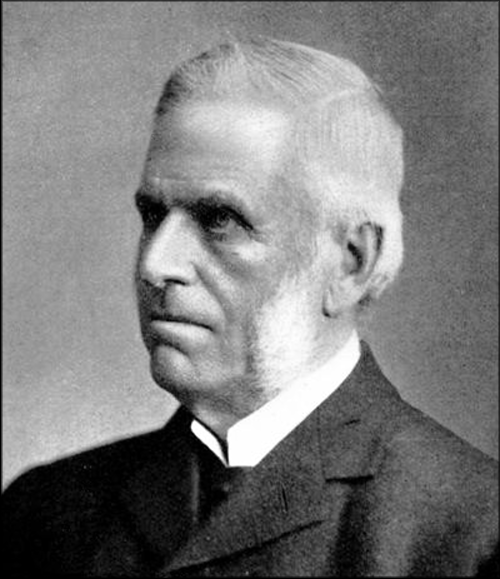 Portrait of Nathaniel Paine Blaker (1835-1920) by A.H. Fry
The Blakers are a Sussex family with a long pedigree. They have been around since at least the end of the thirteenth century and their Portslade branch dates back to the end of the fifteenth century. Although he was born in Selmeston, Nathaniel Paine Blaker (1835-1920) [NPB, henceforth] descended from the Portslade Blakers. NPB’s great grandfather, Nathaniel Blaker, who died in 1815, was “a very prominent citizen of Portslade in the 18th century” according to The History of Portslade: An Interim Report. One of his seven sons, also called Nathaniel Blaker (1772-1863), moved to Selmeston. And he in turn had a son, also called Nathaniel Blaker (1800-1880), a farmer who moved to Perching Manor in Fulking with his wife and son in 1835, shortly after the birth of NPB, who was to remain an only child. It was clearly a prosperous family — the 1841 census records a total of five household servants, more than any other household in the parish of Edburton at that time.

NPB trained as a surgeon. Although his father was a farmer, and probably his grandfather too, such a choice of career was in no way surprising for a Blaker — two cousins and a great uncle also became surgeons. NPB started at Sussex County in 1852 and then went on to Guy’s in 1855, qualifying in 1858. He practiced at convict hospitals in Lewes and Woking before returning to work in Brighton, initially as House Surgeon at the Brighton & Hove Dispensary in 1860 and then in the same role at Sussex County in 1864 with promotion to Assistant Surgeon in 1869, later becoming a Senior Surgeon and subsequently Consulting Surgeon there.

Sussex County Hospital in the mid nineteenth century
At some point when NPB was in his 60s, a medical friend suggested that NPB commit his reminiscences to paper. He was, presumably, expecting a record that would concentrate on NPB’s long medical career. But that is not what he got. In 1906, NPB wrote to his friend as follows:

Though medical matters are, of course, what you are most interested in, I trust you will pardon my endeavour to give a sketch of a Sussex village as in childhood I recollect it, before railways, better roads and easier means of communication had done away with the primitive habits and customs of the rural population as I first knew them.
[Letter to Dr. Arthur Newsholme, 30th July 1906]

In the event, NPB’s informative and affectionate portrait of rural Sussex as seen through the eyes of a child and teenager occupies the first 138 pages of the book that he wrote. The long medical career gets a mere 60 pages and he tells us virtually nothing of his life from 1870 onwards. But he got the balance right. Miles of shelves in Hay-on-Wye groan and splinter under the weight of dusty Victorian medical reminiscences that few buy and fewer read. By contrast, various editions of Sussex in Bygone Days, including modern paperback copies, are readily available on Amazon and elsewhere. The original version of the book was printed, “for private circulation only”, in 1906. The version that is most readily available today is the “revised, extended and largely rewritten” book that NPB published in December 1919, the year before his death. In addition to A.H. Fry‘s superb photographic portrait of NPB, the 1919 book contains three historically interesting photographs taken by Dr. Habberton Lulham who also wrote the foreword (one of those photos can be seen facing the title page, above). Sussex in Bygone Days fully deserves its status as a classic of Victorian rural history alongside Maude Robinson’s book about Saddlescombe. NPB’s friend and colleague Sir Arthur Newsholme got his prediction exactly right:

I cannot but think that our successors fifty or a hundred years hence will be glad to read such a vivid account of the rural life of a favoured part of our Old England, as it was lived in bygone days. It is a fragment of local history which has permanent value. [Letter to NPB, 21st May 1918]