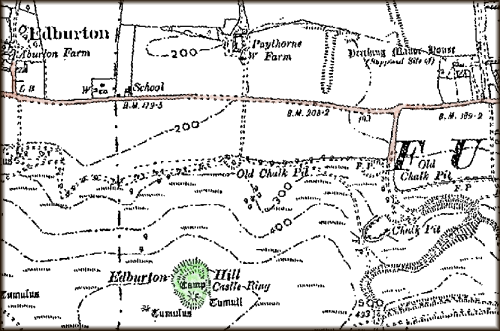 A nineteenth century Ordnance Survey map showing the location of Castle Ring in relation to Edburton Road which sits some 400 feet below it.

Castle Ring[s], also known as Edburton Castle or Edburton Camp, sits at the peak of Edburton Hill on the Downs halfway between Fulking and Edburton. It cannot be seen from the road. It can just be seen from the South Downs Way as you descend the western slope of Perching Hill, but only if you already know what you are looking for. There is no marked footpath to it. Getting there entails a steep climb across a field. But it is worth the effort. The structure itself, which has ‘scheduled monument’ status, is impressive and the views over the Weald are the equal of those from the Dyke.

Castle Ring has not been excavated and rather little is known about it or what it was for. Even the date of construction is uncertain although most sources point to the end of the 11th century, immediately after the Norman conquest. Volume 1 of the Victoria County History, published in 1905, refers to it as “this curious little work” and remarks that:

There no traces of masonry, and, as far as one can see, there is no supply of water near. Why it should be placed here is a mystery, unless, indeed it was a signalling station visible perhaps from Pulborough and Knepp Castle.
[Page 1905, page 476]

It has a very small rectangular bailey [= external wall], and an equally insignificant motte [= mound]. It is probably an outpost castle constructed soon after the landing in 1066. The boundary of the rape [= administrative district], and the division between East and West Sussex, passes immediately to the west of the motte ditch.
[Salzmann 1940, page 202] 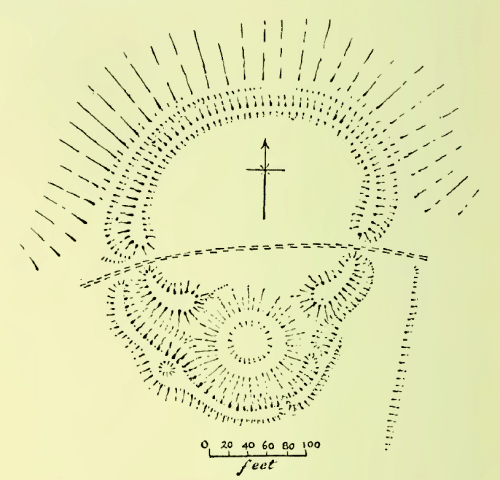 Hadrian Allcroft’s magisterial Earthwork of England, published in 1908, still provides the most comprehensive archaeological description and discussion of the site:

Edburton Camp crowns a prominent hill-bastion of the northern face of the Downs .. In position it resembles Chanctonbury, as also in having one vallum [= earth rampart] and one fosse [= trench or moat], but it is singularly small even for a Sussex fortress, measuring no more than 60 yards across the widest diameter of the diminutive area, and in plan is quite unlike any other hill-top fortress. The line of the defences follows the oval contour of the exiguous hill-top on all except the southern side, where it is interrupted by a depressed mound of 100 feet in diameter, the fosse looping outwards to cover the base of the mound. The whole plan, therefore, is at first sight much that of the simplest form of mount-and-bailey fortress. But on close examination this resemblance will be found to be less real than apparent: the mound is too low to have been a motte, for it does not attain even to the 10 feet or so of vertical height reached by the vallum on either side of it, and it can never have been much higher than it now is, for had it been greatly wasted the fosse along its southern side must have been far less deep than now, and the depression at its centre must have disappeared. More important still, the fosse is not carried round the northern side of the mound, and apparently never was. The vallum to east and west rises to more than average height, but ends abruptly, neither reaching to the mound nor being continued round its base. A shepherd’s path traverses the area, passing the vallum by openings seemingly both original in the eastern and western sides. From the western entrance commences a second vallum, which follows the edge of the fosse right round the southern angle of the camp and then gradually disappears. It is at its highest in the angle where the fosse bends to accommodate the mound, and at this point is a circular depression about 8 feet wide in its broad summit. The great mound is neither flat-topped nor ringed by a vallum, but in its centre has a cup-shaped basin 33 feet in diameter and perhaps 3 feet deep. The ground to the south of the camp is to all intents level, but there are no signs of any outworks, unless a small and low mound 80 yards to the south-west be such. From the eastern entrance, where the slope is steeper, a very slight scarp is traceable for some 40 yards in a direction west of south. It is perhaps an old plough-mark. Fragments of pottery are to be found in the mole-casts along it. Further to the west lie several barrows which have yielded very early remains.

Of all the South Down camps this is the most puzzling: it would indeed be difficult to find another like it anywhere. It has been said of it that it “has nothing in common with the hill-forts (of Sussex).” One would rather say that it has everything in common with them except the mound. The nearest analogy to the mysterious mound with its depression is that within the area of Mt. Caburn, which would seem to have been a reservoir. It is much to be regretted that Pitt-Rivers, who explored the one, did not examine the other also; and small as Edburton Camp is, the task of exploring it completely would be an easy one. Meanwhile there is nothing but conjecture. Some have suggested that the mound was a beacon. If that were so, what was the need of the rest of the earthworks? Yet they are all apparently of one plan with the mound and of one date. Others believe it to be a Norman fortress; but against this is the absence of any encircling fosse about the whole of the mound, quite apart from the exceptional character of the site, at an elevation such that no water can have been found within several hundreds of feet at any time during many centuries past. Edburton must remain a mystery until the spade is brought to unlock its secret.
[Allcroft 1908, pages 659-662, footnotes omitted] 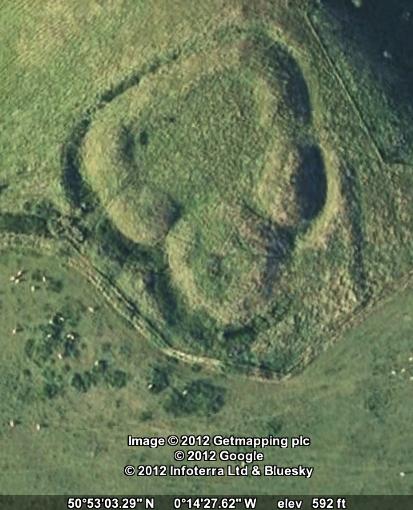 Recent reference material (i) lists the structure as “Early Medieval/Dark Age — 410 AD to 1065 AD” but then immediately goes on to say that it is believed to be Norman; (ii) claims that the central depression resulted from “mistaken barrow digging in the 19th century” but offers no evidence for this speculation; and (iii) suggests that the use of Castle Ring was “more likely to have been administrative and residential” than military but fails to address the implications of the apparent absence of any water supply. It seems that Allcroft’s conclusion — “Edburton must remain a mystery until the spade is brought to unlock its secret” — is as true today as it was more than a century ago.