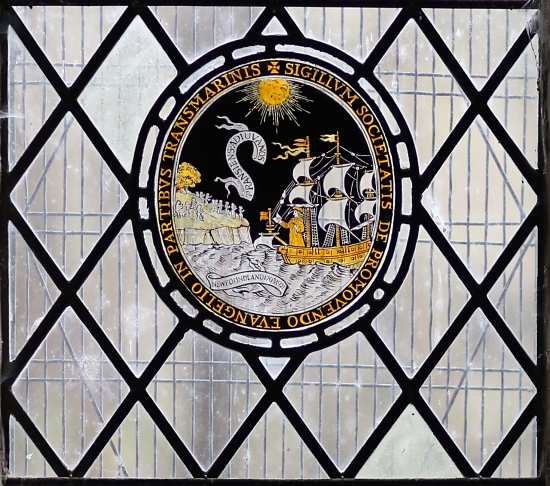 There was a ceremony at Littlehampton in 1951 at which the Society for the Promotion of the Gospel presented St. Andrew’s with a painted glass copy of its first seal, in order that it might be displayed in the church as a token of the connection of the parish with the Society through the Reverend George Keith, first missionary of the society and afterwards Rector of Edburton. The then Rector, Norman Charles Hony, lost no time in arranging for it to be mounted in a window of the church so that it could be in position in time for the visit of the Bishop of Lewes to preach at the harvest thanksgiving.

So it came about that, at the beginning of the evening service on Sunday 16th September 1951, in the presence of a very large congregation, the window was dedicated. Grouped round the window were the Bishop vested in his scarlet rochet, surrounded by the rector and servers carrying the processional cross and lights, a bright and colourful little scene. The Bishop recited prayers to bless the window and in memory of, and thanksgiving for, George Keith, priest. A1l the aspects of the ceremony were indeed summed up in the well-worn formula with which his lordship concluded: “Let us bless the Lord: Thanks be to God: May the Souls of the faithful, through the mercy of God, rest in peace”.

The window is near the pulpit and replaced a very ugly plain glass one. A photograph of the central section of the window appears above. The clear background is relieved by patches of faintly tinted glass and in the midst the coloured glass circle of the seal gleams like a jewel. The translation of the inscription round the edge is “The Seal of the Society for the spread of the Gospel in regions beyond the seas”. The words over the people on the cliff are taken from Acts XVI, verse 9, in the Latin Bible (Vulgate): “Come over and help us”· The reference to Newfoundland was added to the panel for some occasion for which it was not used. An admirably worded explanatory inscription by the rector [Norman Charles Hony] is placed beneath and can be seen below.

[This post comprises a somewhat edited version of a report by F.A. Howe that originally appeared in the October 1951 issue of St. Andrews Quarterly.]