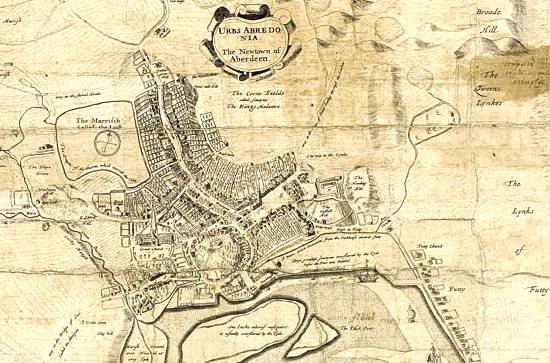 A map of New Aberdeen as it was in the seventeenth century.
Marischal College is in the centre of the built-up area.
The Rev. George Keith, a very militant Christian, was born in 1638 as he records, and probably near Aberdeen. He was educated at Marischal College, 1654-1658, and became a very learned tutor. He fell under Quaker influences about 1663, and soon began to write and speak forcefully. He was imprisoned at Aberdeen in 1664, for ten months; and the next year, attempting to preach there, was knocked down by the bell-ringers of “the great place of worship.” In 1669, 1682, and 1684 he was again in jail. At this time he felt the influence of [George] Fox, and in imitation clung to the old-fashioned doublet, and would not wear a wig. 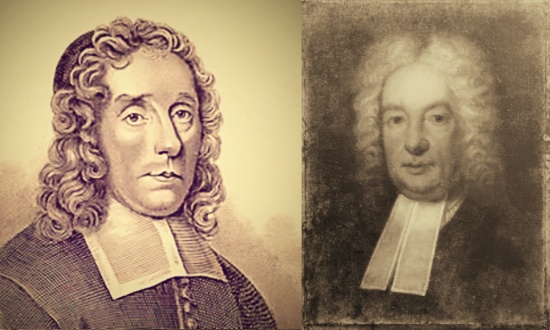 Increase and Cotton Mather: influential figures in C17/C18 New England
Keith went to Boston in 1684, where his attack on the “gross abuses, lies and slanders” of Increase Mather aroused his son Cotton; in 1689 he went to Philadelphia, to become head master of the first Quaker school. Fox died the next year, and Keith, after twenty-six years of defense of Quakerism, began to waver. In 1691 he was in dispute with Philadelphia leaders, and was disowned at the yearly meeting in 1692 and again in London in May, 1695; not, as they announced, for opinions, but for his “unbearable temper and carriage.” 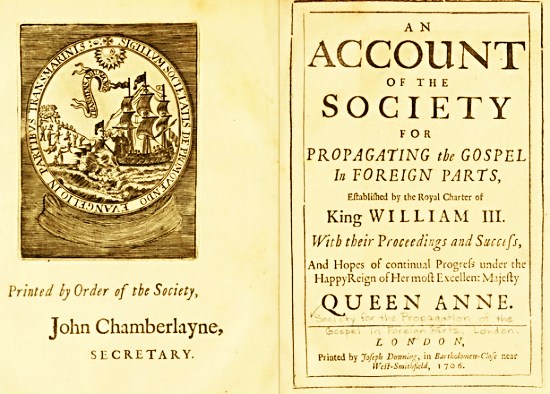 He joined the Church of England in 1701, and the next year went to America as a missionary of the Society for Propagating the Gospel in Foreign Parts. Here he labored zealously and successfully to proselyte among his former followers until June, 1704, when he returned to England. The next year he became rector of Edburton, Sussex, where he remained until, crippled by rheumatism, he died 27 March, 1716.

His wife was Elizabeth, daughter of Dr. William and Barbara (Forbes) Johnston, of Aberdeen. He had a daughter and grandchildren at Kicketan, in Virginia, in 1703, a son, and perhaps other children. 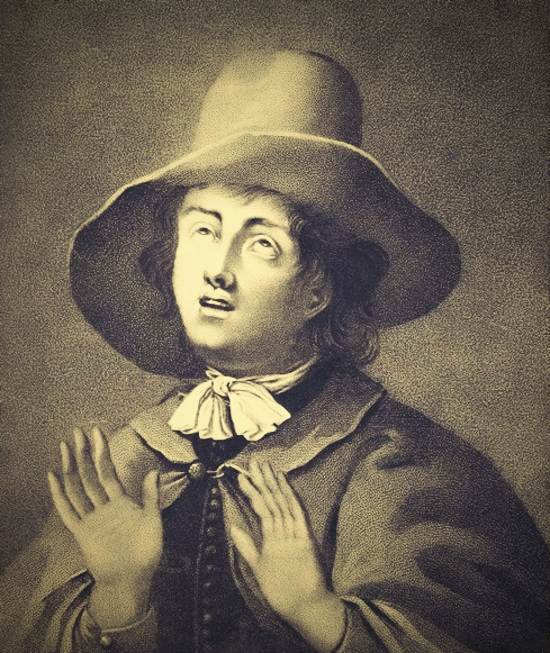 George Fox in 1654, not long after his vision of “a people in white raiment,
coming to the Lord” that led to the founding of the Quaker movement.
Keith’s innumerable writings picture a controversial mind, devoted to the “exteriors of belief and practice,” Intellectually arrogant, appreciative of kindness, but incapable of moderation. He preached next door to Quaker meetings to confound their less able defenders. He even rose to deride them from their own gallery. When Quakers objected to his intrusion, he said:

A meeting-house is for the service of the truth. I speak truth and your speakers speak not truth: therefore I have a better right than they.

He claimed that Quakers believed the Light within them sufficient to Salvation, and therefore that they slighted Jesus. He assailed them bitterly at Boston, Newport, Flushing, Oyster Bay, in Virginia, the Jerseys, and Maryland, and they replied with quotations from his earlier writings.

There is unconscious humor In his Journal, 30 August, 1702, where he describes his rescue from drowning by a Quaker, John Burden:

I thanked him very kindly for his help in our great danger, and said to him, ‘John, ye have been a means under God to save our natural Life, suffer me to be a means under God to save your Soul.’ He replied, ‘George, save thy own Soul, I have no need of thy help’; then said I, ‘I will pray for your conversion’; he replyed, ‘the Prayers of the Wicked are an abomination’; so uncharitable was he In his opinion concerning me.

[This is an extract from Charles Knowles Bolton (1919) The Founders: Portraits of Persons Born Abroad Who Came to the Colonies in North America Before the Year 1701, published by The Boston Athenaeum, Volume 1, pages 257-258.]