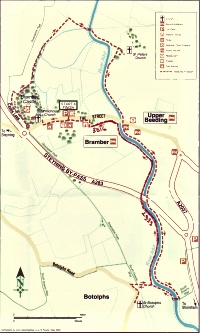 Readers may have seen coverage in the local press about two recent developments relating to footpaths and bridleways in the area due south of Bramber and Upper Beeding. Unfortunately the reporting is rather opaque as to exactly what has happened and where. One development is a new (safe) bridleway crossing for the A283. This may be the topic of a further post when a map becomes available. The second development, the one considered here, is the surfacing of a previously unsurfaced footpath running along the west bank of the Adur. This has been compacted and it can now be navigated by people pushing buggies, prams, pushchairs and strollers, or those in invalid carriages or wheelchairs. The newly compacted path runs from St. Botolph’s (almost) to the centre of Bramber. You can click the thumbnail for a PDF map that shows the enhanced section as a continuous red line marked 3516 and 1933 (done by hand — other footpaths appear as segmented red or green lines).

[Many thanks to Martin Leigh-Pollitt of the Steyning & District Partnership for providing the map.]