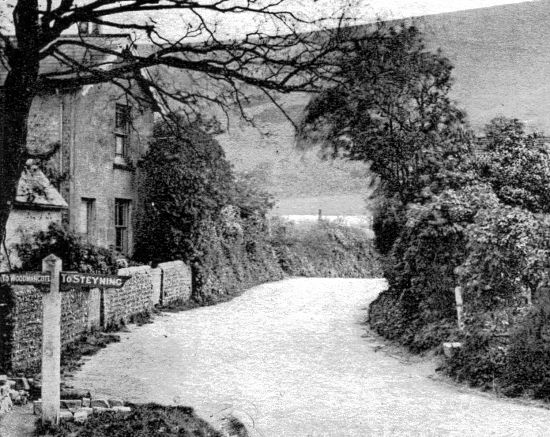 A postcard view of Arcadia from the early 1900s
Arcadia is a nineteenth century cottage on the Poynings Road. Thomas Hills purchased it, along with various other cottages, for £215 at auction in 1922, probably to house workers for his adjacent market garden.

For a long time Victor (Vic) Burse, a well-known village character, lived in Arcadia with his three, successive wives. The first was Mary, the second was Kathleen (Kath) and some years later, in 1983, Vic, who by now was 74, married an 18-year-old, a local girl called Debbie Jarvis. They continued to live together in Arcadia until Vic died in 1998. Debbie later moved away from the village. Vic was known in the village as a storyteller and used to enjoy sitting with the locals at night, in the Shepherd and Dog, keeping the younger villagers entertained with tales of the war and things that he had done in his younger days.

The cottage was extensively refurbished in 2006, which included updating the interior, carrying out extensive repairs to the roof and redecorating inside and out. However, externally it remains unaltered. It remained the property of the Hills family, who let it out, until 2010. The new owners improved the property further with ambitious landscaping that included a drive that made off-road parking possible for the first time.