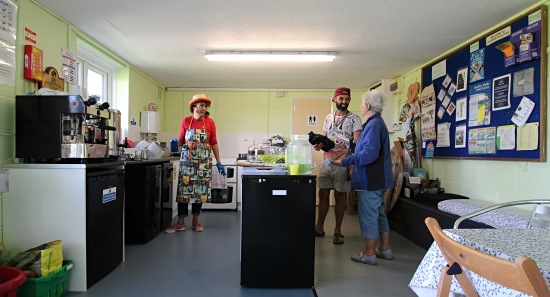 Curiosity took me to Bob’s Café in Poynings on my way back from Henfield on Wednesday. It is not in the old white van, as I had previously supposed. It is beyond the playing field car park, just through the gate, before the swings. The cafe is in a splendid well-furnished building with tables, benches, chairs, cushions, cake stands with home-made cakes, bone china cups for tea, and an expresso machine There are two rooms and plenty of additional seating outside when the weather permits. There are toilets and dog water bowls too.

I was there late afternoon and met several people coming and going. One man had come to see the impressive exhibition of well-framed black and white photographs taken by a Poynings resident. Another man came to leave a message before setting off soon to Vietnam. Two people went outside to play table tennis. And then a young woman came in with her smiling twelve month old boy in her arms. She had just moved into Poynings a week or two ago. I learned that Poynings still has allotments.

I even picked up some Fulking news about the closure of The Street on Monday evening. Apparently, a runaway car had straddled the road, completely blocking any way through. My informant had been in a car en route to Poynings after an evening in Lancing. They had no choice but to turn their car round and take a longer route back.

How do you meet new neighbours? Do you feel lonely? Do you just knock on a door? Well now there is Bob’s Café. Good luck to it. I had such a good time there — I shall go again and I hope other visitors from Fulking will enjoy it as much as I did.