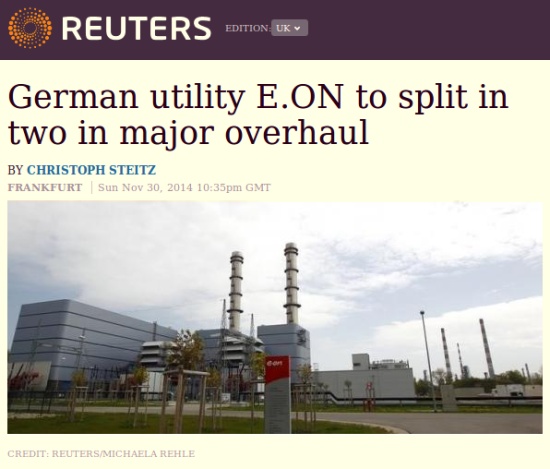 Some discussion by engineers and others here.
Fred F. Mueller outlines the rationale for the move:

With just a 48-hour notice delivered by a personal phone call to Ms. Merkel on a Saturday, the CEO of E.ON, the largest German and European power producer, let it be known that the company had decided to split itself in two, one part grouping fossil and nuclear power generation and a second part encompassing the “politically correct” activities in the field of “renewable” energies. Sort of a “Bad E.ON” / “Good E.ON” move. The intention is to get rid of the “bad” part as soon as possible by putting it up for sale. At the same time, this also means the “good” part will cease to be duty bound to ensure a stable power supply under all circumstances. Obviously, such a liability is not enforceable from an entity whose only power sources are unstable wind and solar power plants. In a nutshell, the message behind this move is that the silverback of the “big four” German energy producers who group the bulk of the country’s conventional and nuclear power production is about to close shop at short notice.