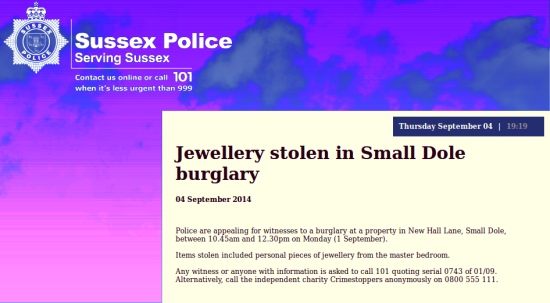 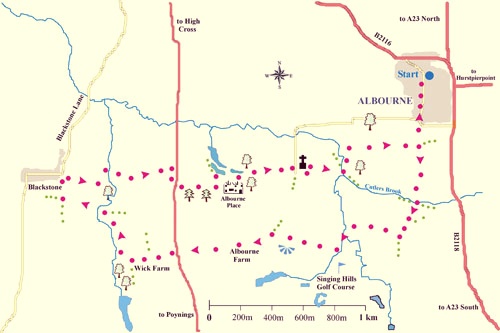 There’s an illegal occupation by travellers near the Village Hall in Albourne, and the people may be moved on. MSDC and Sussex Police are aware of it. If you have any issues relating to this occupation, phone Sussex Police on 101 (the non-emergency number). If you see a crime being committed (or just about to be), phone 999 instead. As ever, please continue to keep your garden sheds, outbuildings, etc., secured.

The 26-year-old man and 24-year-old woman, both from Worthing, were questioned after homes .. were broken into in May, June and July. The homes broken into were in Balcombe Road, Crawley, Bramlands Lane and Wheatsheaf Road in Henfield, Woodpecker Lane and Link Hill in Storrington and West Chiltington Lane in Billingshurst. Among the items stolen were electrical equipment, jewellery and cash.

Sussex Police would like you to register your property.
[There’s a sister service called CheckMEND, the fence’s friend: if someone offers you a purportedly stolen iPad in a pub you can use this service to check that the item really has been stolen and that the seller is not simply trying to palm you off with something that he bought from a shop quite legally but has got bored with.] 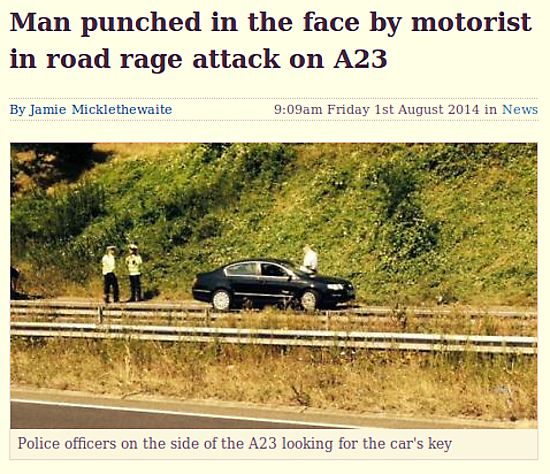 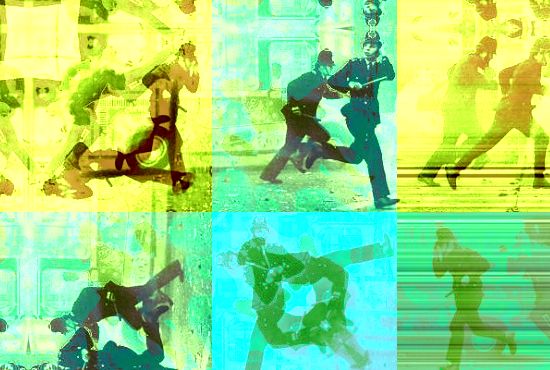 Sussex Police stopped two raves overnight on Friday into Saturday morning and a further two Saturday night into Sunday morning. This crackdown comes just weeks after Sussex Police and Crime Commissioner Katy Bourne called for a review into how the police force deals with raves after they failed to stop a 2000 strong event at Devil’s Dyke. ..

Officers were called around 10:00pm on Saturday to Wivelsfield near Burgess Hill as the rave was being set up and people were arriving. ..

At 12:40am on Sunday morning another rave was stopped at Stanmer Park in Brighton where 50 people had attended with more people attending the location. Police attended, seized the sound equipment and arrested three men. ..

On Saturday night at around 10:00pm police were alerted to a large rave being set up in Falmer. Officers attended and arrested six men. ..

A further small rave was also broken up in Rogate, near Petersfield, at 3:00am where approximately 60 people were in attendance. No arrests were made.

Four experienced riders were on their way to Oreham Common when a lorry came round the corner and swerved in between the horses. Smiffy, a five-year-old, and 25-year-old Harmony jumped into the trees and ditch. The accident happened on Tuesday, May 13, in Horn Lane, heading towards Woods Mill Nature Reserve. It was a flat-bed lorry, over 7.5 tons. The cab was white with green text with the words ‘Upper Beeding’ on the side and a fax number.

Police are appealing for witnesses after a lorry swerved to miss a car in Horn Lane, Woodmancote, on May 13 at about 4:00pm and spooked some horses being ridden along the lane. One of the horses was injured. The vehicle was a flatbed lorry with ladders on the back and a white cab with writing on the side. Anyone with information should ring police on 101 quoting serial 0768.

As the warm weather continues and we get further into summer, raves are more likely to take place. Sussex Police have already stopped several raves and will continue to do so when possible. Landowners and residents in rural areas can help by being vigilant in their area.

We ask you to let us know immediately if a rave is seen or heard to be taking place. The earlier the police are alerted, the greater the chance of preventing them becoming established.

Keep an eye on access points to land and make sure they are secure. Please report any locks which have been broken or removed. Report any vehicles driving off-road, groups of vehicles in rural areas, convoys of vehicles and loud music in remote locations.

Police will use powers to confiscate equipment being used at raves and will deal with any unlawful activity when they can. Raves by their very nature are spontaneous and unpredictable and we urge people to report any behaviour which is suspicious.

The police have powers to to close down an event and the decision to do so will be carefully assessed to balance the safety of those attending and the threat posed to the local community.

There’s an illegal occupation on the football field in Poynings, and the people may be moved on .. Mid Sussex District Council and Sussex Police are aware of this. If you have any issues about this occupation, phone Sussex Police on 101 (the non-emergency number), quoting crime reference 1487 of 26 June. As ever, if you see a crime being committed (or just about to be), phone 999 instead.

Postscript 1: roads into Poynings were blocked by the police last night and access to Fullking from the East was via Clappers Lane only. The roads are clear now but the occupation persists. The photo below was taken at around 11:00 this morning.

Postscript 2: the recreation ground had been vacated by 12:50pm.