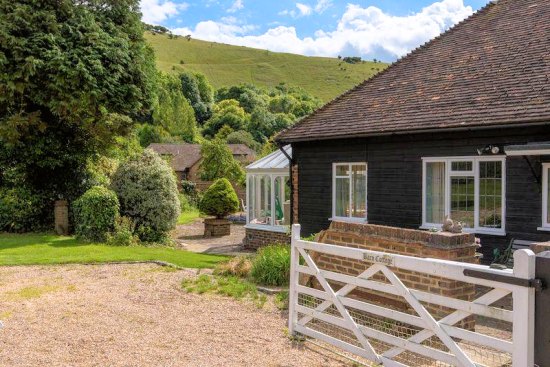 In the 1930s, this site was where the village blacksmith’s shop stood. It was here that the farm and dray horses were shod and all the hardware (gates, hinges and wrought iron railings) for the Shepherd and Dog and the village houses were forged. It was originally part of the Bungalow Farm, known today as ‘Four Acres’ and it was later partitioned off from the farm as a separate property. The buildings comprised a wooden house with a corrugated iron roof and the oldest walls were constructed of horsehair, dried leaves and daub. Some of the original beams still form a feature of the interior of the house. An adjoining lean-to was fitted with a large, sliding door where carts were stored and behind this was a yard and stable.

Mr. Ernest (Ernie) Wingham, who kept cows off Holmbush Lane, occupied the house for many years. Ernie operated a milk round at the north end of Fulking. He also kept a stock of shotgun cartridges at the house and some of the older residents of the village can recall being sent to purchase these for their fathers’ guns. When Ernie later moved to Littledown Farm, he sold the property to the local builders, Ridge & Franks, who used the building to store their materials. They later rebuilt the property, converting it into a single dwelling and sold it. In the 1980s the site was enlarged to include an additional area of land to the east, which provided a garden and parking area. Parts of the old farm walls still survive as testament to the origins of this small cottage with its wonderful views south to the Downs.