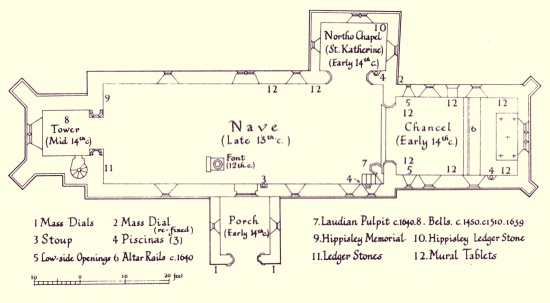 An aisleless C13 church with a C14 tower. The north chapel is earlier C14 and there is an early C13 lead font.

Edburton was the westernmost parish in the Archbishop of Canterbury’s Deanery of Malling, to which it appears to have been attached in 1150 (Dunkin p28). The main settlement in the parish is at Fulking, which is in the Rape of Lewes and until 1974 in East Sussex. The church stands on a knoll under the Downs with only a few houses nearby.

Although in the greensand belt, the material used is flint. Nothing identifiably earlier than the C13 remains, though traces of a tall and narrow blocked north doorway could suggest the walling of the nave, unusually long in the absence of aisles, was earlier, possibly C11. Rebuilding usually began at the east end, but here the nave has the earliest features, including plain lancets and a large south porch with a Horsham slab roof and a double-chamfered arch, like the doorway inside. 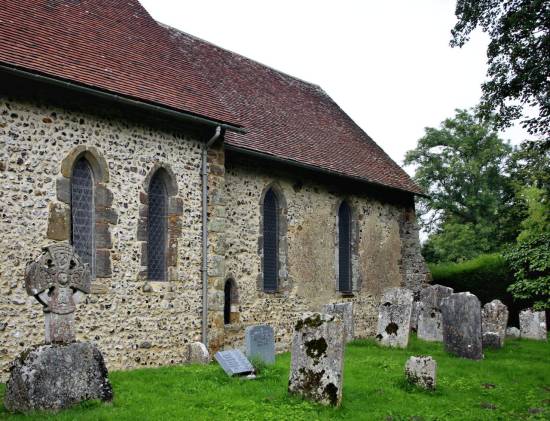 The chancel lancets are larger, with a small lowside each side, both nearer to the ground than usual.  That on the north side is not in its original condition, for a mass dial on its jamb (see below) is upside-down and out of reach of the sun.  The presumption that the chancel is later than the nave derives from the chancel arch.  Its semi-hexagonal responds, continued above the abaci, and the two chamfered orders of the head merging into them are seldom found before the end of the C13; the arch from the nave into the north chapel is similar. 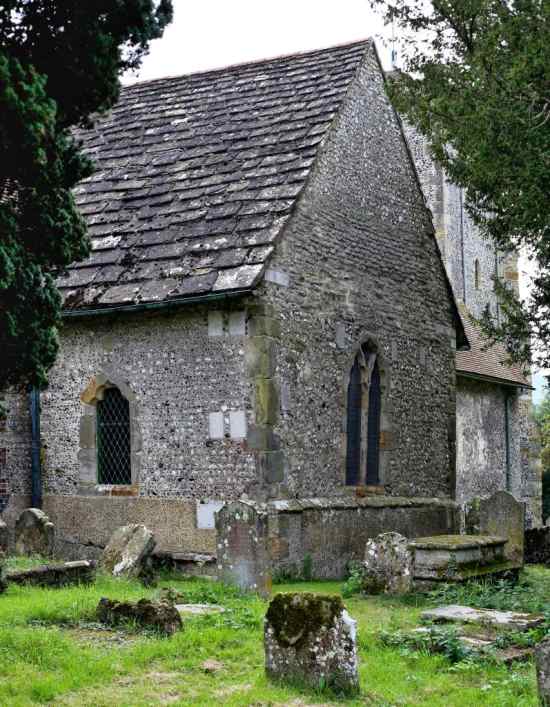 William de Northo founded a chantry to St Katherine here in 1320-21 (Godfrey p53), but both arches may be a little earlier. As built, the chapel had east and west gables and was parallel with the nave (ibid), but it was later rebuilt with a north gable, placing it at right-angles to the nave — the date of this work is uncertain. Its plain west lancet was clearly taken from the nave. Typically early C14 are the broad cinquefoiled east lancet and the north window of cusped Y-tracery. 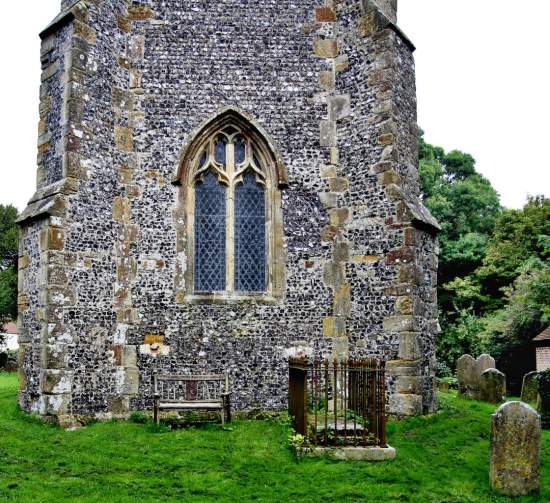 Corbels at the west end of the nave on either side would have supported a belfry, incorporated in the roof, before the plain tower was added.  This has diagonal buttresses, tiny pointed bell-openings, a low pyramid spire behind a parapet and an arch with semi-octagonal responds and a double-chamfered head.  Though the whole might look early C14, the west window, the most ambitious feature, resembles tracery at Poynings, which can be dated to c1375.  At Edburton the window has only two lights, but the combination of panelling and ogees is distinctive. 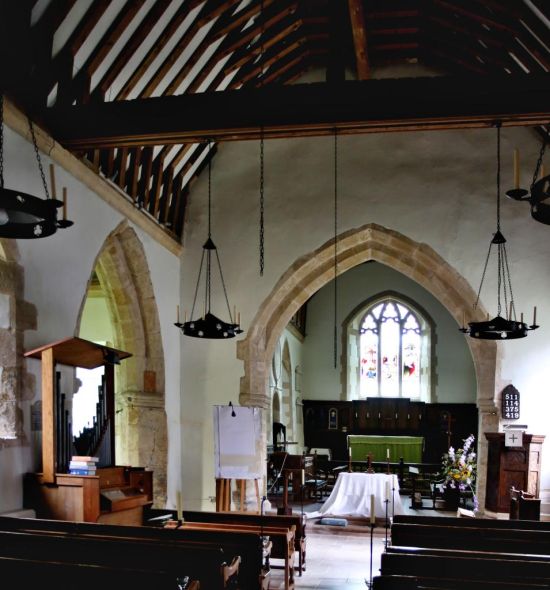 There is evidence of work carried out between the C16 and the C19, particularly a stone over the south doorway dated 1732, and the Burrell Collection drawing (c1780) shows plain three light east window with transom. This is certainly post-Reformation, though the drawing is not ideally clear and it appears to be set in an opening with a very depressed head which might come from a C16 window of which nothing now remains. The chancel was restored in the 1830s (Hudson p52), though its present traceried east window dates from about 1868 (ibid). The main restoration was in 1877-78 by R.N. Shaw, though not completed until 1880 (The Builder 39, p558); his fine nave roof with castellated beams is actually dated 1881. He probably also designed the two-light north window with a quatrefoil head and the boarded chancel roof. The neo-Jacobean chancel fittings, derived from the C17 pulpit and communion rails, reflect Shaw’s interest in styles other than gothic. Though the work is extensive, it is said to have cost only £1573 (Kelly’s Directory for Sussex 1899, p326). 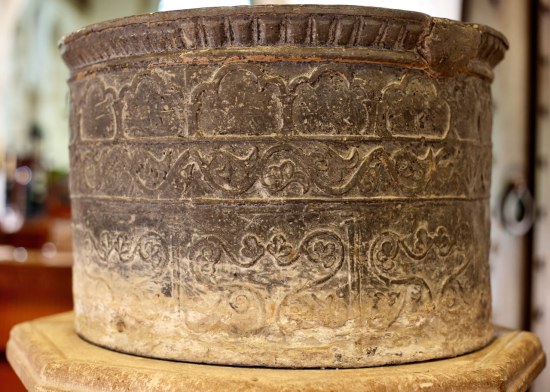 Font: Early C13 (i.e., the earliest datable object in the church). Lead and closely related to that at Pyecombe, though the delicate scrolling and trefoiled arcading around the top of the bowl suggest it is slightly later. 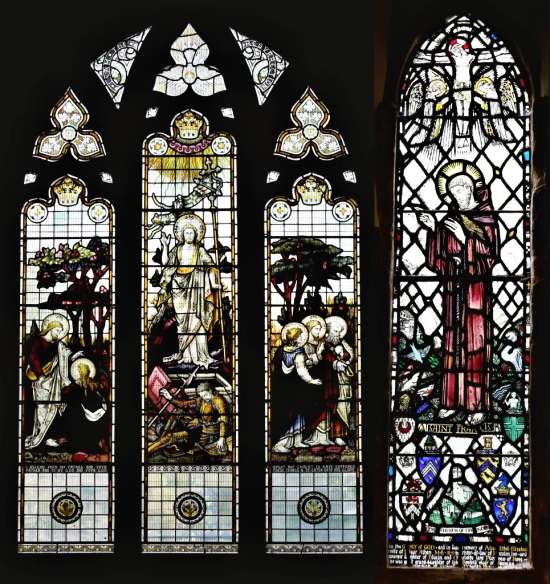 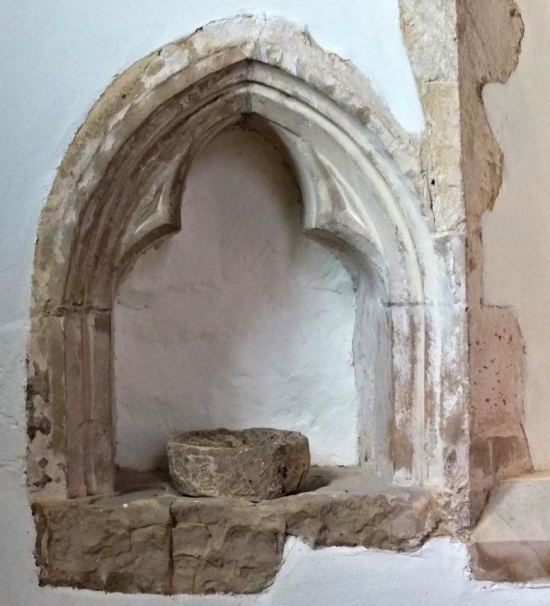 Piscinae:
1.  (South chancel) Late C13 trefoil-headed.
2.  (South nave wall) C13 square-headed.
3.  (North chapel) C14 pointed and moulded.
4.  (Loose on floor) Broken bowl, which has been assigned to an early date, but is unlikely to be older than the church. 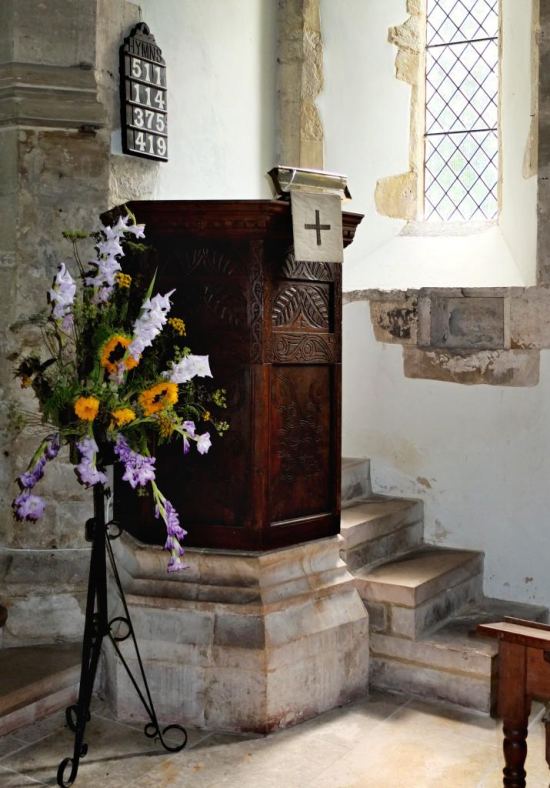 Mass dials:
1.  (North chancel lowside) Reset – see above.
2.  (East angle of south porch) Two, with a further one at the west corner.