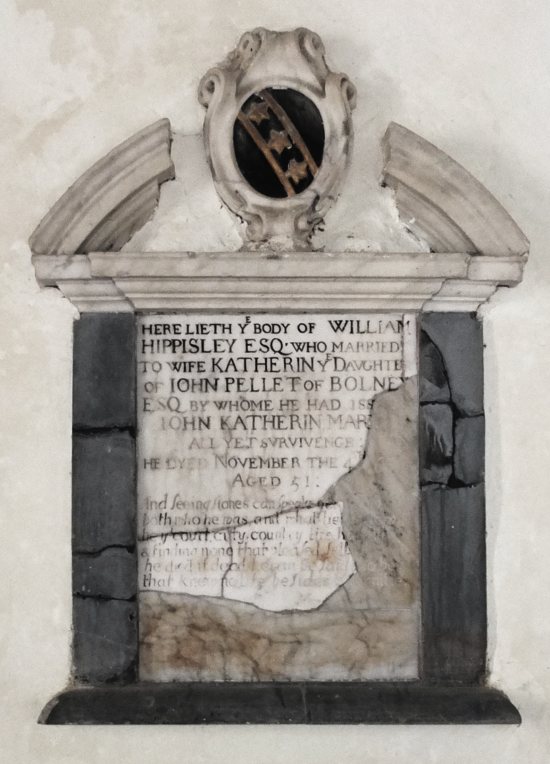 The Hippisley Memorial as it appears in 2015
William Hippisley, who died aged 51 in 1657, married Catharine, co-heir to her grandfather Sir Benjamin Pellatt; from him she inherited Truleigh, in Edburton, Sussex. They had a son John and daughters Catharine and Mary. From the elder daughter descended the poet William Cowper. His mother was Anne Donne, whose mother was Catherine Clench, daughter of Catharine Hippisley.

In the north transept of Edburton church William de Northo founded a chantry, in 1319. The Northo chapel later became known as the Truleigh Chapel and here was erected, perhaps some years after his death, a mural tablet to the memory of William Hippisley, above, it is presumed, the ledger stone that had already been laid in the north-east corner of the chapel. The ledger stone is inscribed:

As early as 1777 the inscription on the mural tablet had suffered the damage apparent today. In June of that year the Reverend Charles Vaughan Baker, Rector of Edburton 1754-1784, supplied particulars of the memorial to William Burrell, that the latter recorded in his manuscripts preserved in the British Museum (Add.Mss. 5698). It was on the north wall of the ‘Truly Chancel’ there was the coat-of-arms, and the imperfect inscription. At a date unknown the monument fell or was removed from the wall.

One learns (Sussex Archaeological Collections XXXII (1882), page 230) that the tablet, previously lying in fragments, had, in the course of the restoration of the church at the time, been re-fixed in the Truleigh Chapel. At a subsequent date, but not within the memory of any present parishioner [in 1958], the memorial was again removed and, until lately, lay in pieces at the west end of the nave. 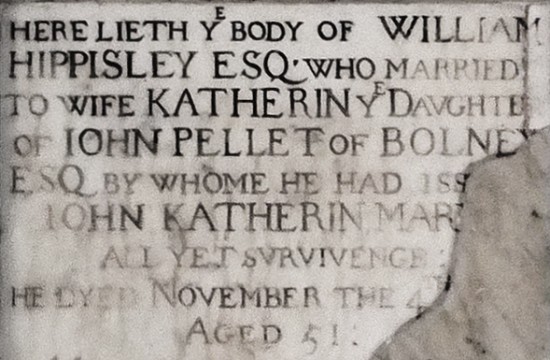 The tablet is of white marble, now made good with composition, and is in a simple white and grey marble architectural frame, still nearly as far as can be judged complete; between the white marble broken pediment is a plain cartouche with coat-of-arms, as described in Sussex Archaeological Collections LXXII, pages 221-222; ‘Sable three rowels between two bendlets or’, for Hippesley. The missing words of the inscription have been conjecturally added, with the aid of hints from Sussex Archaeological Collections XXXIV (1886), pages 261-262, but in a way to distinguish from the surviving original inscription. In the following transcript the lost words or part words are shown in italics:

And seeing Stones can speake yet show
Both who he was and what lies below
He that Court, City, Country Life had fill
And finding none that pleased fell ill.
He died, if dead he can be saide to be
That knew no life besides Eternitie.

There are notices and pedigrees of the Pellatt family, with reference to William Hippersley or Hippesley, so spelt [in] Sussex Archaeological Collections XXXVIII, page 121 and opposite page 112, and in Elwes & Robinson Castles, Mansions and Manors of Western Sussex, part I, page 86 and opposite page 34. Of Hippisley I can find nothing, other than in the authorities I have mentioned. He may have been kin to the family of the name, of Yatton in Somerset, or to the family of whom there are memorials in the church of Lambourn, Berkshire (D. & S. Lysons Magna Britannica volume I, part II, page 309).

The Hippisley Memorial [is] an attractive feature of Edburton church, if not an imposing one, interesting too, for the association with, in Hayley’s words, ‘that amiable man and charming author’, William Cowper. May William Hippisley have transmitted his melancholy and varied genius to his far-away descendant?

The first half of this post comprises a very lightly edited version of an article that originally appeared in the January 1958 issue of St. Andrews Quarterly. The author was a Fellow of the Society of Antiquaries and a prolific writer of scholarly books on local and ecclesiastical history. His first book was published when he was just 22. Later works included Memoir and select letters of Samuel Lysons, 1763-1819 (1934); Beechcroft. The Story of The Birkenhead Settlement 1914-1924 (1938) with Horace Fleming; History of Pagham in Sussex: Illustrating the administration of an archiepiscopal hundred, the decay of manorial organisation and the rise of a seaside resort (1949-50) in three volumes; The little churches of Chichester: St. Peter North Street, St. Olave North Street, St. Andrew Oxmarket, All Saints in the Pallant (1957); The Church of St. John Baptist, Westbourne, in the Diocese of Chichester, Sussex (1958); and The Chartulary of Boxgrove Priory (1960) translated from the Latin and edited by LF. The son of Peter Fleming, a wealthy antiquarian and rare book collector who lived at Aldwick Grange in Bognor Regis, Lindsay Fleming retained the family home after the death of his father (c1933) and died there himself in 1966 at the age of 64.

Lindsay Fleming’s article was prefaced by some background remarks, probably written by the then-Rector F.J. Cornish, that are themselves worthy of note and are thus reproduced below:

For very many years the Hippisley Memorial has lain in fragments in the Nave of St. Andrews Church, Edburton, and recently Mr. Lindsay Fleming very kindly wrote to the Rector, Reverend F.J. Cornish, suggesting that a memorial of such interest would be better if repaired (where possible) and re-sited and fixed in the wall of the church.

After consultation with Mr. Francis W. Steer who is the County Archivist, the Rector, the Honorary Secretary of the Parochial Church Council and Mr. L. Anscombe, the monumental mason, it has been agreed that this work be done.

Very many people, including visitors to the Church, have sought more information of the Memorial than given in the little pamphlet dealing with the history of St. Andrews Church, so we are happy to print a much fuller report, prepared by Mr. Lindsay Fleming himself.

It may be some little time before the Memorial is refixed, but due mention will be made in the Quarterly.

In the event it seems that the necessary work was done rather quickly since F.A. Howe was able to insert an addendum to the end of the table of contents for his 1958 book (A Chronicle of Edburton and Fulking in the County of Sussex. Crawley: Hubners Ltd.) as the book went to press as well as a photograph of the restored memorial (ibid., page 102). Both are reproduced below: 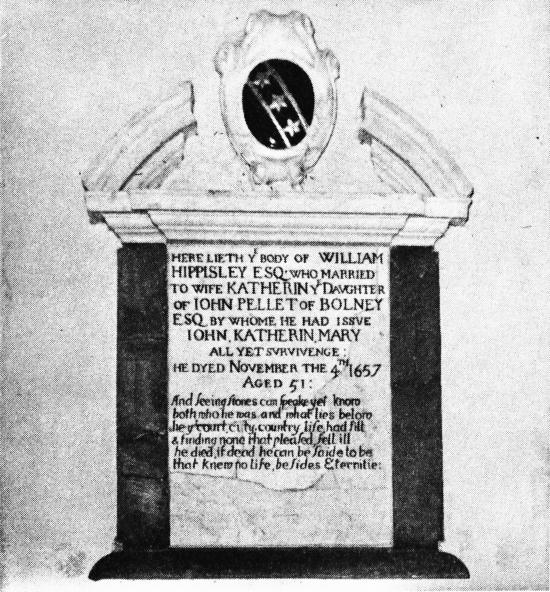 The Hippisley Memorial as it looked immediately following restoration in 1958

ADDENDUM
The Hippisley Monument
Since the book went to press the monument has been reassembled and repaired under the guidance of Mr. Lindsay Fleming FSA, and Mr. F.W. Steer FSA, and is now affixed to the north-west wall of the nave. A conjectural completion of the broken lines of the verse has been added:

And seeing stones can speake yet know
Both who he was and what lies below
He yt court, city, country life had fill
And finding none that pleased, fell ill
He died, if dead he can be saide to be
That knew no life, besides Eternitie

Apart from additional commas and the abbreviation of ‘that’ as ‘yt‘, the only change from Fleming’s conjectured verse is the replacement of ‘show’ with ‘know’ in the first line.

Howe’s book contains a couple of shards of additional information about William Hippisley: a reference to him as ‘WH of Hurstpierpoint’ (page 13) and a note of his summons to appear before the Quarter Sessions in early April 1649 — a couple of months after the execution of Charles I — for “divers seditious words and speeches” (page 21).

The Reverend C.H. Wilkie seems to have made something of a hobby of the memorial during his time as Rector of Edburton (1877-1884) including corresponding with members of the Hippisley family. He discovered that:

William Hippisley was educated at Westminster, and became Fellow of Christ Church, Oxford. He travelled with the Duke of Buckingham as his tutor. He was nephew to Sir John Hippisley, of the Long Parliament.
Sussex Archaeological Collections XXXV (1887), page 196.