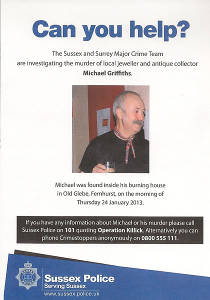 The Chichester Observer has extended reports on a murder trial with a local connection. Here are some extracts:

Penton, 43, of Markway, Sunbury, denies murder and conspiracy to pervert the course of justice, but has admitted conspiracy to burgle homes in Loxwood, Poynings and a home near Godalming as well as Mr Griffiths’s home.

The jury also heard how the burglary at Poynings on May 24, 2103, to which Penton has pleaded guilty, came after he found the house in Country Life magazine.

The murder of Michael Griffiths has been described by both a forensic pathologist and a police inspector as the ‘most complex’ case ever seen.

Much more here and here.