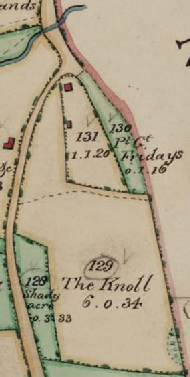 Knole House is the red square near the top of this 1842 map excerpt.

Prior to the twentieth century, there was very little housing in Clappers Lane. The present Knole House is built on one of the oldest residential sites. There was a small cottage on the site in 1701 and the cottage was probably built some time before 1650. That cottage seems to have endured for three centuries. On the north side there is an old droveway which originally linked farms in Poynings with Clappers Lane. There was a small orchard in the southern part of the grounds, which is gault clay. There were still about forty fruit trees there in the early 1950s. Immediately due south of the property is a field called The Knoll.

Census records show that the cottage was occupied by the Hurssey family in the mid-nineteenth century. In 1841, Daniel Hurssey, his wife, and two adult sons are listed at Clappers, but this is most probably a reference to the area rather than the to house of that name, which was just across the road from Knole House. By 1851 one of the sons had married and fathered a child. All six were living in Knole House and the occupation of each of the three adult males is listed as market gardener. In 1861, Daniel, now aged 74, has become a widower and is living in Knole House with an adult grandson and a female servant from the Beard family. One of his sons is living elsewhere in the village with wife and child.

By 1871, all the Hursseys have left the parish and Henry Sayers, a widower, has moved into Knole House with three children and a housekeeper. Like Daniel Hurssey, Henry was a market gardener and he had already been living in Fulking for at least twenty years. By 1881 he had remarried and he and his second wife remained at Knole House until at least 1901, when Henry was 79. 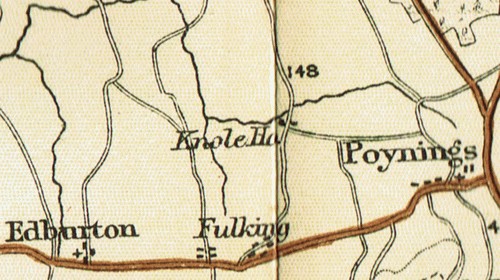 Nowadays, Knole House is shielded by trees and cannot be easily seen from the lane. But the location is explicitly marked and named in many old maps. This example from a 1898 guide book to Sussex suggests that it was a landmark at that time. It may be that the adjacent ford provided a watering place for horses.

At some point during the early years of the twentieth century, the cottage passed into the hands of Henry Young, a builder whose firm was called ‘H.Young & Son’. He was contracted to construct Fulking Village Hall in 1925/26. Henry’s son Sid and his wife May subsequently inherited the cottage and lived there. May Young, a pleasant, cheerful lady with a good sense of humour was the district nurse for the local villages, who at first made her calls on a bicycle, but was later provided with a car to make her rounds. In those days there was no local health centre with up to date facilities nearby. A visit to the doctor had to be paid for and admission to hospital cost a great deal of money. Nurse Young was thus the first person to receive a cry for help for any medical emergency. Even today, some of the older village residents recall being told that they were delivered at home with her assistance. The Youngs also sold fruit from the trees in the garden. When Sid Young died, May moved initially to Primrose Cottage, and later to Teapot Row, in The Street, Fulking. She put Knole House on the market, but it remained empty for some time. 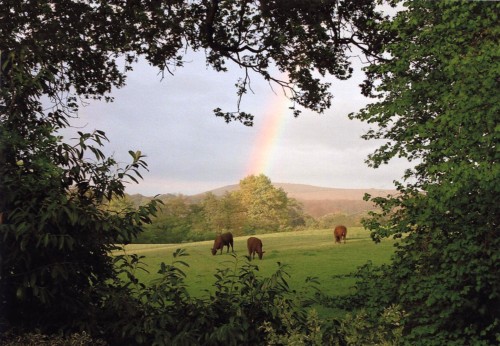 The view of Wolstonbury Hill from Knole House around 1990, much as it would have been 300 years earlier.

When the Youngs lived in the cottage, they used the adjacent stream as their water supply just as all the previous residents had. There was no electricity (or gas) so lighting required candles or oil lamps. There was no sanitation. Nothing much had changed since the cottage was built — except that the quality of the water available from the stream had deteriorated thanks to chemical run-off from the fields. Furthermore, the foundations of the cottage, which sat on greensand, were unsound and needed serious attention. Despite the idyllic location, it is little wonder that the cottage remained empty — it was not in a condition that would have attracted domestic buyers in the 1950s. 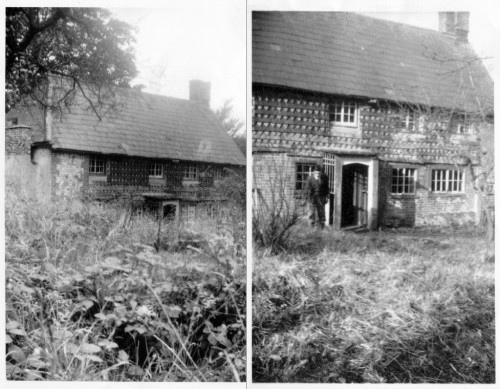 Two snaps of Knole House as it was prior to Ray Nobbs’s reconstruction in the mid-1950s. Note the porch, the steeply pitched slate roof, the small-pane windows, and the very distinctive patterned tile hanging. The young man in the picture on the right is Ray’s son Chris.

Knole House was purchased in 1954 by Ray Nobbs. Ray was a builder who had the skills that were needed to rescue the cottage, and the vision to see what it could become. He demolished much of it but then rebuilt it on sound foundations in exactly the same location. Parts that were retained, including at least one of the end walls and the associated fireplace and chimney stack, had to be excavated and then underpinned with concrete. The original cottage had had a roof with a relatively steep pitch with slates at the front and tiles at the back. The rebuild had a roof with a shallower pitch and tiles throughout. Chris Nobbs notes:

During renovations Dad unearthed what we thought was a fourteenth century window, from looking at old churches. This was at the back of the house where the old walls were massive and built of flint cobbles, previous occupants had a kitchen here of sorts, it had a very old sink anyway. Down a few steps from here was a kind of cellar with grills to the outside admitting a little light, there were several rings in the floor and we thought that long ago livestock may have been kept. That is actually below the present kitchen extending to the conservatory. The wall at the front was old tiles and brick but beneath that we discovered the original massive oak beams which formed the superstructure and between were laths plastered with wattle and daub.

An immediate priority was the water supply: Ray enlisted the services of Mr Spronket, water diviner, and then dug a well in the grounds, a well which still functions today. And, in the 1960s, Ray was instrumental in securing a mains water supply for the houses in Clappers Lane. In his reconstruction, Ray used materials salvaged from the original cottage and from various old houses and churches in the Brighton and Hove area that had been demolished. As a consequence the house has many interesting features including an old gallery staircase; large, very heavy, solid wooden doors; and a unique front door, along with beams and attractive arches in the hall. One feature that he restored was the linhay, a lean-to shed attached to the north end of the house. This linhay was to assume an interesting role in the subsequent history of the house. 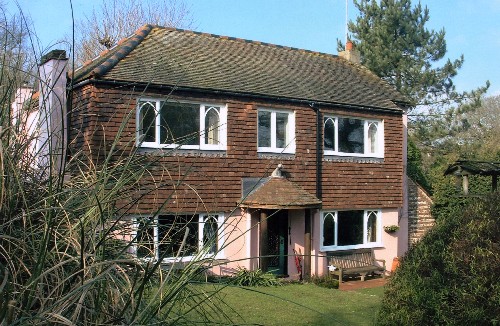 Knole House as it was in 2007. Note the conical porch, the shallow pitch Keymer-tiled roof, the first floor hanging tiles, the distinctive windows with their gothic sidelights, and the side-wall of the linhay on the right.

In 1987, Ray Nobbs and his wife moved to a bungalow in Hassocks. They sold Knole House to Jill and Nick Bremer. The Bremers made some further architectural changes, most notably restoring Keymer tile-hanging to the front of the house (which had been left rendered by Ray). They retained the unusual conical porch that Ray had installed. They converted the attic over the garage, formerly the shed for a carriage, into a proper room with a view over the fields. The linhay had been in use for storage and as a utility room. The Bremers doubled its size, re-roofed it with glass, and converted it into an artist’s studio. When the Bremers sold the house in 2007 and moved to Devon, the buyer was another professional artist, one who continues to use the linhay as his studio.

With thanks to Chris Nobbs for reminiscences of his time at Knole House and to Jill and Nick Bremer and to James Lightfoot for their help with source materials for this post.

Updated to include reference to Henry Young, 9th February 2015.