[This is the second of two posts about the history of this house. The first is here.] 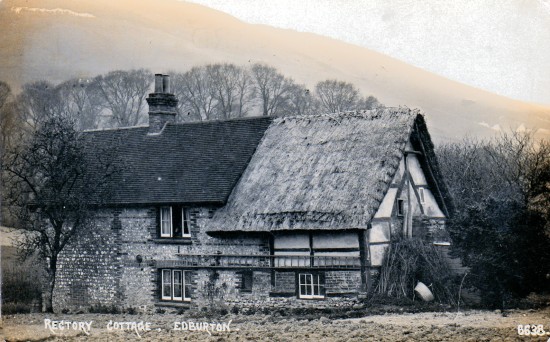 A postcard of Rectory Cottage, Edburton from c1900. The house is now known as Michaelmas Cottage.

Michaelmas Cottage is a Grade II listed building in Edburton. It is now a single dwelling but it comprised a terrace of two or three cottages for much of its history. The listing details are as follows:

Michaelmas Cottage is a small 16th century timber-framed house with a crown-post roof. A chimney-stack and an upper floor were inserted into the former open hall in the 17th century, and the house was at some time shortened to the north and extended to the south.

During his tenancy, F.A. Howe made a detailed study of “the three cottages, now merged, standing to the south of the church”:

The earliest of these is probably the oldest example of the house of the small yeoman farmer surviving in the parish, and, at least until 1956 it was substantially in its original condition. The walls, resting securely on the solid greensand, are of cob, or consolidated lime reinforced by straw or cattle dung. They are of an average thickness of twenty inches. They enclose the ground floor and support an upper storey of timber framing rising from an inverted king-post gable. The interior is divided by a timber-framed plaster-filled partition running up through both floors, making an entrance lobby 3’6″ by 3′ (the original purpose of the space behind is unknown: it is now a food-store) and the living room 12’0″ by 7’6″, with a height of 5’6″. There is a wooden staircase which may be later than the building. The upper storey, floored on beams resting on the cob walls had a bedroom over the living room from which a second room was entered through a doorway not four feet high under a beam cut away for headroom to the shape of a depressed Tudor arch, a feature of significance in dating the building. This second bedroom, almost entirely under the roof slope (the upright walls of both rooms are not shoulder high), was no wider than the lobby below and was lighted by a single window not more than a foot square. As late as 1900 these rooms were slept in by at least four people, the men in the larger and the women in the other. The living room had a chimney recess in the north wall from which extended the usual baking oven.

A notable and unusual feature is a small opening called an owl window set in the north gable end wall. At one time, grain was stored at the north end of the house, but mice and rats would enter under the roof thatch to raid and spoil the grain, rendering it useless. To prevent this, the window was left open allowing owls to come in and control the mice and rats (Customary Cottage, in Fulking, also has an owl window). Underneath the owl window was a massive, wooden water butt that stood about five and a half feet tall and alongside this was a rosemary bush that grew to a similar height. 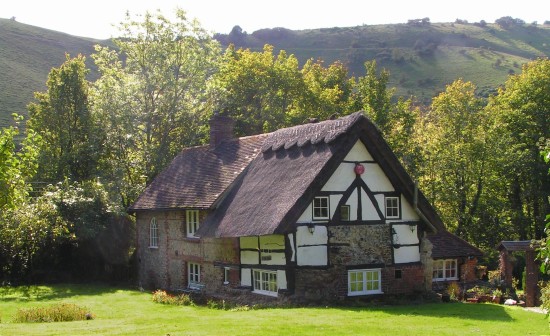 Michaelmas Cottage, Edburton, viewed from the north in 2007. Note the owl window located off-centre immediately above the brickwork in the end wall.

A well in the garden used to supply water for all three cottages and this was still in use up until 1964, when mains water finally reached Edburton. Today, the cottage has large grounds and a flint wall separates it from the path that used to run between the Edburton Road and St. Andrew’s Church. The grounds have always been memorable for the lupins in the sunken garden located on the right hand side of the path leading to the cottage door. The exterior features of the three original buildings are largely unchanged. Inside, the bake oven can still be seen beside the large chimney in the north wall of the living room, but otherwise the interior has been modernised.

The three cottages had a common owner by 1839 and were subsequently converted into a single dwelling. The house was known as Rectory Cottage around 1900 (see the early postcard reproduced at the top of this post) and later as Half Thatch (for a rather obvious reason) and as Glebe Cottages. For at least part of the first half of the twentieth century, the house was owned by the church. Thus a Mr. and Mrs. Smith were church tenants from 1939 to 1950. Mr. Smith was employed to maintain the vicarage garden and the churchyard whilst his wife took care of the interior of the church which was, at that time, notable for the smell of the lavender polish that she used. The couple also treated the church door once a year with linseed oil, maintained the oil lamps used in the church before electricity was connected and kept two coke burning stoves in working order for use when services and other events were scheduled. During the war, a barrage balloon broke from its moorings in Wish Park in Hove and came to rest in their garden.

Between 1950 and 1956, F.A. Howe and his wife became the tenants. Mr. Howe was a churchwarden and their son was a vicar who often visited the church and also preached there on occasion (he went on to become a bishop). Shortly after leaving Edburton for Henfield, F.A. Howe published A Chronicle of Edburton and Fulking which remains the definitive work on the early history of the parish.

In 1956, the church sold the cottage to Mr. and Mrs. Cavosa, who took up residence with their son and two daughters. Mr. Cavosa caught polio from eating ice cream from a shop in Burgess Hill and died shortly thereafter. In the 1980s, Mrs. Cavosa sold the property to Norman and Rita Holt who lived there until 2006, helping with the church and maintaining the cottage. The Holts renamed the house Michaelmas Cottage. During this time, Norman Holt identified some extensive, old foundations in the grounds, which suggest that a house, vicarage or large barn belonging to the church, but long since demolished, once stood on the site. However Norman Holt died in 2006, before he was able to provide more details of this interesting discovery. 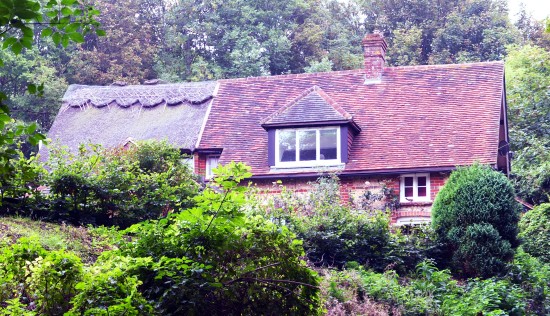 Michaelmas Cottage as seen from the road in 2013