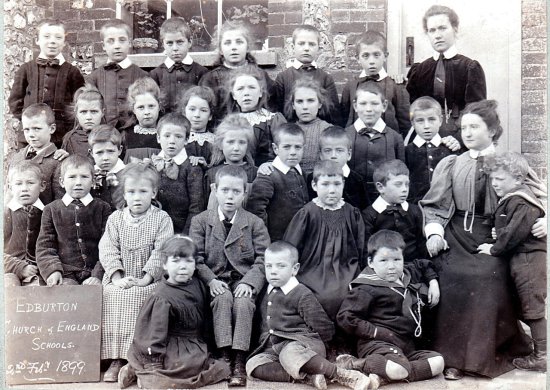 Edburton School pupils and teachers in 1899
A school with a playground at the front was built around 1843 on the north side of the Edburton Road just east of what was, at the time, the boundary between East and West Sussex. Children started school at five years old, left at twelve and went straight to work. In later years the leaving age was raised to fourteen. On leaving school, girls usually went into domestic service in large houses and boys were employed as farm labourers, trainee gardeners or started five year apprenticeships with local tradesmen, as carpenters, builders or blacksmiths.

The original school was partly financed by Colonel George Wyndham, Lord of Truleigh Manor and administered by the Guardians of the Poor — the officials responsible for administration of laws relating to the Poor Law Amendment Act of 1834. Subsequently it became a Church School, mainly due to the efforts of the Reverend J.C.F. Tufnell, the Rector of St Andrew’s from 1840 until his death in 1866. The school was later to be recognised as such under the 1870 Education Act. In 1873 it was rebuilt by the Page family. At that time Eli Page farmed Perching and Richard Page farmed Aburton.

The Parson’s Nose
The keystone over the main door of the school incorporates a gargoyle called the ‘Parson’s Nose’, which originated when the school was being rebuilt. It seems that Reverend Tufnell (who had a prominent nose) and a member of the Page family had had a disagreement. Thus the Page family added the gargoyle over the door. Richard Page’s son Walter, born in 1870, always maintained that the nose had been added “in memory” of the Reverend Tufnell.

The commercial directories published over the relevant period tell us quite a bit about the history of the school. The 1851 edition of the Post Office Directory records the existence of a free school in Edburton and names Margaret Willett as the mistress. By the time of the 1855 edition she has married and the school is classified as a ‘National’ school. The 1858 Melville’s Directory has her as the mistress of “a free school, conducted on the National system”. The 1866 and 1878 Post Office Directories continue to mention the school but no mistress is identified perhaps because whoever it was lived outside the parish. The 1882 Kelly’s Directory, by contrast, is full of information:

as is the 1887 edition of the same directory:

The 1891 edition repeats this information but average attendance has fallen to 60 and Miss Emily Samson has replaced Miss Smith as the mistress. By 1899. average attendance has fallen to 32 (see the 1899 photo above) and Miss Hannah Humphreys has replaced Miss Samson as mistress. In 1905 the school is described as a ‘Public Elementary School’, average attendance has recovered to 65 and Miss Mabel Hudson has taken over from Miss Humphreys. Miss Hudson served as mistress at the school between 1902 and 1917. Average attendance had fallen to 48 by 1911. In 1922 Miss Averil Haigh was in post but the average attendance figure is omitted by Kelly’s. Miss Aldridge was appointed in 1925. She arrived at school every day on a motorbike, having ridden over from Steyning, which must have been quite a feat as the roads were little more than rough tracks and the reliability of motorcycles in those days was far from good. In her time one teacher took a class of 5-9 year olds and the other a class of 10-14 year olds. The pupils were all farm workers’ children who came from Aburton, Truleigh Manor, Truleigh Hill, Tottington Manor and Paythorne Farm. Other children from Fulking went to the school in Poynings.

Writing in 1957 about Edburton and Fulking as he had known them in the 1920s, Edgar Bishop wrote:

The one and only school — the Church School provided the education but unfortunately disagreement arose between the East and West Sussex Authorities over the administration, and the church lost the School. Incidentally the School had been given under a deed of trust by Lord Leconfield but unfortunately it lapsed and so bureaucracy stepped in and the school was closed. 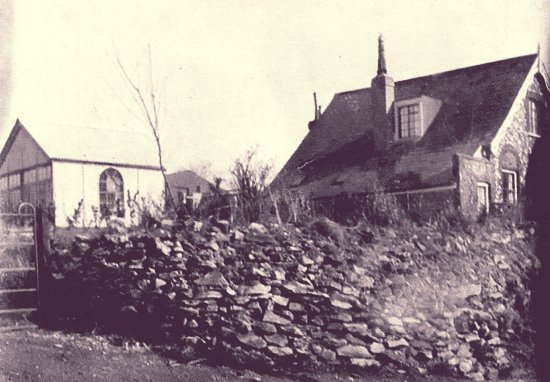 The ‘Dainty Tearoom’ is on the left, the former school to the right with the door to the sweet shop at the rear.

The building was sold and converted into a private house in 1932 and it was then rented out to Mr. and Mrs. Jay and their two daughters Hilda and May. They renamed the building ‘Boundary House’ as it was still situated on the boundary of East and West Sussex at that time. It was later sold on to Amy Harris but the Jays continued to rent it from her. They established a tearoom in the grounds — the ‘Dainty Tearoom’ — that was run by May and her mother. 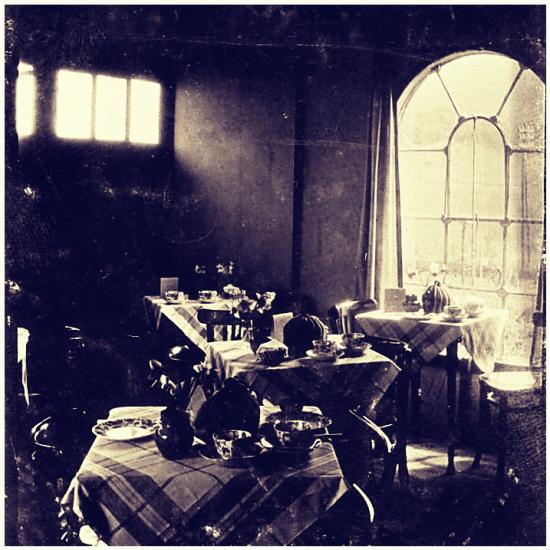 The interior of the ‘Dainty Tearoom’ in the 1930s
The Jays also had a small area set aside for the sale of sweets and cigarettes in the house itself, although the latter was not fitted out as a traditional sweet shop. This was run by Hilda. Customers simply went to the back of the house and selected their sweets from a glass case set just inside the door or from screw top glass jars. Cigarettes and tobacco were displayed on shelves. One slight drawback was that in winter the room was heated with a paraffin stove, which caused the room to smell of paraffin and tended to taint the sweets. Nevertheless, it was a popular place with the local children who bought their sweets there. Hilda was known to be a little generous on the weights when serving. At the north end of the garden were two old railway carriages, which were let out to regular visitors as holiday homes, providing additional income and helping to pay the rent of £50 per year. Mr. Jay was blind but he had been a talented miniature painter in his younger days and was reputed to have painted some of the miniature items for Queen Mary’s dolls house completed in 1925, and displayed at Windsor Castle today. His blindness was attributed to carrying out this intricate work. The Jay family continued to rent the property until 1980. 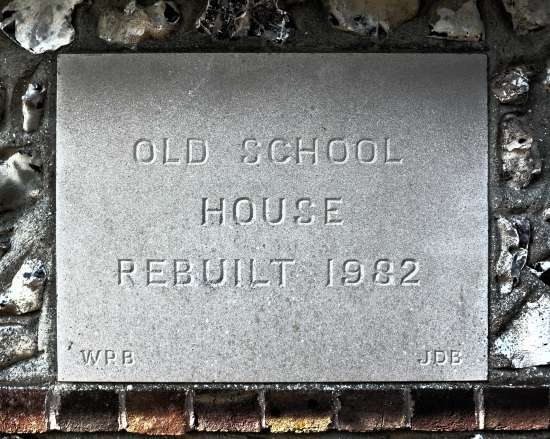 The present owners purchased the house in 1980 and changed the name to ‘Old School House’. When they moved in, the two cloakrooms, whose doors flank the main building, still contained the coat-hangers that the children would have used half a century before. They rebuilt the house in 1982 but the character of the original was preserved. Over time, extensions to the rear have been added and a storage shed has been replaced with a garage, but great care has been taken to preserve the features of the original school building. 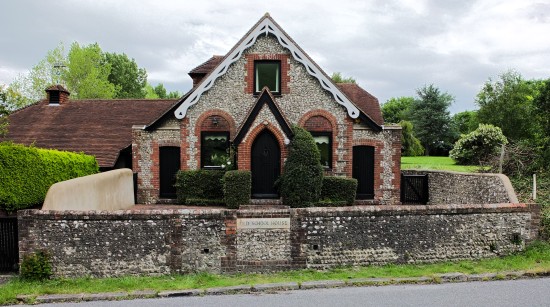 A photograph of Old School House taken in 2014